Chieftain of the Amani, Warlord of Zul'Aman

Zul'jin (aka Zuljin) was a warlord of the Amani forest trolls and had been chieftain of the Amani tribe since before the Second War. Zul'jin and the Amani tribe were allied with the orcish Horde for the duration of the Second War, but Zul'jin himself was captured near its end by the Alliance. Upon gaining his freedom he went into hiding to rebuild his army and plan an attack on the remnants of the high elves, now known as blood elves, only to find them allied with the Horde.

A fierce forest troll of the Amani tribe, Zul'jin's ability as a warrior and leader meant he was able to do what no other troll had done since the Troll Wars: unite the warring tribes of Zul'Aman under a single leader. He was infamous for his daring raids on the outskirts of Quel'Thalas at a time when trolls had been completely beaten into obscurity by the high elves. Some claimed he planned to unite all trolls, but his plans were quickly put on hold by the events of the Second War.

At the time of the Second War, the orcish warchief Orgrim Doomhammer approached Zul'jin to ask the forest trolls to join the Horde. Zul'jin initially refused; however, when Quel'Thalas later allied itself with the human nations, Zul'jin realized the Alliance would turn on the trolls once it was done with the orcs. His subsequent capture by humans and rescue by the Horde led him to join forces with the orcs during the Second War.

Zul'jin fought throughout the Second War; however, he grew furious when Doomhammer not only failed to destroy Quel'Thalas, but also abandoned his siege against the elves in favor of assaulting Lordaeron, and as a result Zul'jin and his armies stayed behind, slaughtering thousands of elves. Yet once it became clear the Horde had lost the war, his alliance fell apart, and the forest trolls returned to their savage and undisciplined ways, removing themselves from the Horde as quickly as they had joined it.

It was during this time that Zul'jin mysteriously "disappeared". Most believed he died under a hail of Alleria Windrunner's arrows.[1] (HPG 158, 166) This turned out to be incorrect, as Zul'jin had been captured by the elves and subsequently tortured for hours on end, eventually losing his right eye. When his tormentors were attacked by a small troll war-band, Zul'jin seized the opportunity and cut off his own arm with a fallen spear to escape.

A small tribe, known as Revantusk became friendly with Thrall's Horde around the time of Zul'jin's disappearance.[1] (HPG 166) When Zul'jin went missing, this tribe was left to defend itself against other tribes, who viewed Revantusk as weak for remaining on friendly terms with the Horde.

Once Zul'jin was able to escape his tormentors, he fled to Zul'Aman and began to rebuild his once mighty troll army. He had planned to attack the blood elves soon, only to discover that they had allied with the Horde - an act which he considered the Horde's final betrayal of his people. After that the witch doctor Malacrass suggested a way for the Amani to gain great power through dark ways, which Zul'jin agreed to in his anger. Now Zul'jin is intent on destroying the elves - and, if need be, the entire Horde.

This section concerns content exclusive to World of Warcraft.There's a quote from the quest Cannibalistic Cousins in which Mystic Yayo'jin of the Revantusk tribe says: "If Zul'jin were here, he would have destroyed the whole lot of them with a flick of his wrist - alas, Zul'jin has not yet returned and we are left to our own devices." The Revantusk tribe hold Zul'jin in high regard (like all trolls do) and that's probably the reason Mystic Yayo'jin wishes he would come back to help his tribe. That the Revantusk still hold Zul'jin's oath to Orgrim Doomhammer in high regard may also be one of the reasons why they agreed to a pact of friendship and mutual assistance with the Horde under Thrall.

Huntsman Markhor of the Revantusk:

"Zul'jin shall return one day. Mark my words. Until then, we all hold our positions and do what we can to keep the forest troll population intact."

Zul'jin is also mentioned by the Captured Hakkari Zealot on Yojamba Isle, but only as a passing comment:

"The young races? The infants? Humans? Orcs? Dwarves? You expect to defeat the Hakkari? To destroy a GOD? It shall NEVER happen. We are legion. We are united. Where are your heroes? Vol'jin sits in sanctuary at the side of the young Warchief, unaware. Zul'jin missing, probably dead."

The Burning Crusade: The Gods of Zul'Aman

Zul'jin - styled as "Warlord Zul'jin" - can be found as the final boss encounter of Zul'Aman, the capital of the Amani tribe. Zul'Aman can be found in the Ghostlands, and is a 10-player dungeon like Karazhan. Zul'jin will be the third playable character from Warcraft II to be an instance boss in World of Warcraft (after Kargath Bladefist and Teron Gorefiend), and the second to be a final boss (after Kargath).

Zul'jin will be able to draw upon the ghostly spirits of each of the four liberated animal gods from the instance and change his own shape to assume their powers.

Zul'jin's story in his own words

This is Zul'jin's tale as told in the trailer to Patch 2.3:

Dis... was our land. TROLL land. We Amani was here before anyone! Da' elves and dere Alliance came to drive us out. But we never give up. We never forget...

De' Amani never give up! We never forget. We never die. 'Dis is our land: you wanna stay, you stay here forever! We gonna bury you here.

Zul'jin was also character in cancelled Warcraft Adventures. He was once a notorious bandit, but later sold junk goods in a run-down trading post. This version of Zul'Jin is portrayed very differently than other incarnations, he is portrayed as a braggart with a 1930's gangster style of speech He also has both arms.

According to the World of Warcraft RPG troll names look simple but are surprisingly complex. It states that their language is largely syllabic, and various syllables can be added to the beginning or end of a troll's name to denote status and ability. Additionally the book explains that troll given names are usually one syllable, and that they may take on two syllable names or add a syllable to their name later on, when they take a position or status. Some trolls drop their given names altogether and are known purely by their titles; Zul'jin for example might be used for a great tribal witch doctor[2] (WoWRPG 50). The book does not discuss a specific "Zul'jin", but discusses the name as a title that can become a troll's new name. In the novel Tides of Darkness, Zul'jin is shown to be used as a name as well.

The WoWRPG talks of Zul'jin as a name/title in jungle troll culture, rather than about the person. This leaves implication that there may be other Zul'jins. Blizzard has only talked about prefix "zul'" in the context of when it is used in the name of a person. No source has given the definition and syntax when the prefix is used for major troll cities.

It should also be noted that the playable Troll Headhunters of the Horde in Warcraft III are from the Darkspear tribe of the Jungle troll race, but they say "Vengeance for Zul'Jin" when they spawn from the Barracks. However, they may be referring to the title rather than the character.

According to the Troll Compendium all trolls can heal grievous physical injuries and regenerate lost limbs at an accelerated rate, even in battle. It is not clear why this wasn't the case for Zul'jin. He cut off his own arm with a simple spear, and was able to escape before anyone could get to him.

There are other examples of trolls losing their arms, which may show that the concept of limb regeneration is false. Second Troll Legend: The tale of Gri'lek the Wanderer describes another troll who had to become left-handed because he had lost his right arm. Additionally, in the first issue of the World of Warcraft Comic: Stranger in a Strange Land, the human protagonist severs the arm of a Darkspear troll named Trusk; moments later, the team owner mentions that he "won't be able to regenerate that arm". Although Rinling of the Darkmoon Faire seems confident his hand will regenerate if he were to cut it off.

Even in a joke the male trolls say "I heard if you cut off an extremity it'll regenerate a little bigger. Don't believe it." That could mean one of two things: that it doesn't get bigger, or that it doesn't grow back.

Another possible answer is that he was not able to grow his arm back due to old age. He was already very old by the time of the Second War. However this is denied by the fact that the Troll Compendium qualifies its statement by saying all trolls rather than some, young, or old trolls.

Another theory is that perhaps he can no longer regenerate due to something the elves did to him. From the lore it appears Zul'jin was tortured by the elves and lost his eye, so it is equally possible they could have put a spell or curse on him so he wouldn't simply regenerate from their torture, thus prolonging his pain and making the loss of his eye much more significant.

Maybe the regeneration is will powered, and Zul'jin did not want to regenerate his arm, as a reminder of the elves and how they tortured him.

A further theory has been proposed that Blizzard has not been overly careful about preserving its previous lore. In fact, it has in places altered, overridden or completely re-written established in-universe facts to suit the needs of newer story writers. In literary tradition, this process is known as retconning, or retroactively altering continuity. Attempts to reconcile retconned lore with its updated versions are often awkward and challenge the suspension of disbelief.

Elven magic, acid or fire are some of the explanations used within other D&D universes other than Warcraft (but have not been referenced within Warcraft), however, they are not likely answers, as they are not supported by the official RPG or known lore (he had escaped from the elves before they could do anything to his stump). If any of these had been the case, then logically he should have been able to amputate past the damaged sectioned of his arm to expose fresh cells for the regeneration process to begin). Also it's confirmed in the rpg there are no limits to similar forms of "regeneration" other than it won't work on undead.[2] (WoWRPG 330)

Another issue is that Revantusk quest lines in World of Warcraft and Horde Player's Guide imply that Zul'Jin had still been around at the time they made their pact with Thrall, and went missing, again, after that, contradicting that was angry with the Horde after the Second War? The Horde Player's Guide is set prior to the blood elves' allegiance with the Horde,[1] (HPG 151) perhaps the quests are as well. Possibly the Revantusk were unaware of the recent developments. Though it's possible that Revantusk quests and other lore has simply been victims of retroactive continuity. Also, in Warcraft III, Thrall expresses disgust at Forest Trolls ever being a part of the Horde.

Zul'jin is the first troll ever depicted without tusks, though they could be hidden beneath his mask. However, it seems unlikely, as they would probably be visible if it was so. 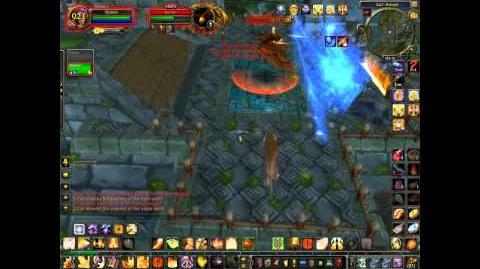 Retrieved from "https://wowwiki.fandom.com/wiki/Zul%27jin?oldid=2852835"
Community content is available under CC-BY-SA unless otherwise noted.