This page is about the old raid instance. See Zul'Gurub (instance) for the 5-man heroic dungeon. For lore and the subzone, see Zul'Gurub (lore).

Zul'Gurub was a 20-man raid instance located in northeastern Stranglethorn Vale, released in patch 1.7. Like Zul'Farrak, it counts as an outdoors zone, and riding on mounts is possible. Zul'Gurub is the capital of the jungle troll tribes, led by the Gurubashi, worshippers of the terrible god, Hakkar the Soulflayer, who personally inhabits a temple in the deepest parts of the city. It is believed that Zul'Farrak was once an outpost of this kingdom but was lost in the Sundering.

The most efficient route through Zul'Gurub is as follows:

The Priest Aspects all assume an animal form at some point when fighting them. Moreover, if they are left alive they grant Hakkar powerful abilities that make him much harder to kill. This is in contrast to other bosses who do not assume animal forms and do not give Hakkar any abilities.

The bosses below are considered 'optional' because they do not give Hakkar any abilities. As such, you can choose to kill or skip them, it won't change your encounter with the Bloodgod.

Zul'Gurub raiders receive loot through several systems. There are standard drops from the bosses (described at Zul'Gurub Loot), quest-based rewards that require Zandalar reputation and special rare drops from bosses (see Primal Hakkari), and rewards that are received after collecting various difficult tasks inside the instance (see Zul'Gurub Trinket and the Enchants discussion, below).

Getting reputation with the Zandalar Tribe offers several benefits.

Various crafting recipes can be purchased from Rin'wosho the Trader, who is located on Yojamba Isle in the far northwest of Stranglethorn Vale. All recipes are BoP. All items crafted from these recipes are BoE.

Zul'Gurub offers unique enchants for the head, leg and shoulder slots. For creating these enchants you need to be Friendly (head and leg) or Exalted (shoulder) with the Zandalar Tribe. The head and leg enchants are obtained within the instance itself from an NPC named Zanza the Restless. He is located in a small "temple" after Lord Venoxis, and just before you go up the ramp toward Bloodlord.

Upon reaching friendly reputation you can receive a neck slot item (as well as some gold and rep), e.g. the Maelstrom's Tendril from Falthir the Sightless. You can upgrade these items as your reputation improves. 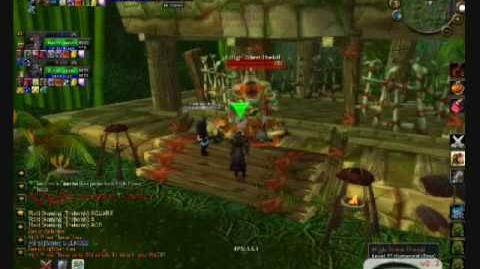 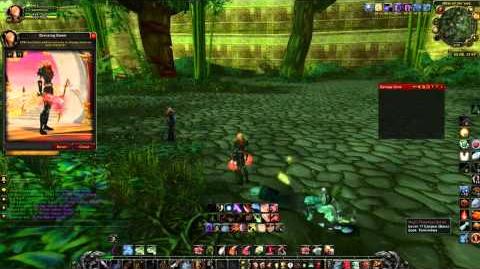 For the Hoard 13.1 The Raptors of Zul'Gurub
Add a image to this gallery

WoW Insider The Daily Blues: Zul'Gurub is gone as a raid instance come Cataclysm by Adam Holisky Sep 1st 2010 at 9:00AM

Retrieved from "https://wowwiki.fandom.com/wiki/Zul%27Gurub_(raid)?oldid=2754669"
Community content is available under CC-BY-SA unless otherwise noted.