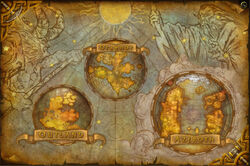 Zones are areas of the map with designated themes, mobs, and scenery. These areas have borders much like a state or country, and though invisible, they define areas.[1] (WoWOSG 9) They may contain subzones, cities, towns, villages, or instances. For example, the zone of Dun Morogh contains the subzone of Coldridge Valley, the city Ironforge, the town Kharanos, and the instance Gnomeregan.

World of Warcraft has multiple continents including the Eastern Kingdoms, Kalimdor, Northrend, Broken Isles, Kul Tiras, Zandalar, and Pandaria, as well as the realms of Outland, Draenor, and Argus which are sometimes divided into other sections which are also called continents, and further divided into smaller sections in-game known as zones.[1] (WoWOSG 212)

In lore and the old Official web site (now defunct), a zone is usually referred to as a "region" (however, the community has basically forced Blizzard to start using zone instead). Furthermore, lore regions and in-game zones do not always match up (what may be a region in lore may be reduced to a subzone in-game, or some subregions may become their own zones).

This article includes a list of all zones by level. Many zones are subject to level scaling, meaning the level of quests and mobs adapts to the level of the player's character. There are some exceptions, noted in the tables. Zones that share a table may have the same level cap, but often have a different entry level requirement. Keep in mind that, if playing on a Player vs. Player server, players will be automatically flagged for PvP once they progress to at least the "Up to level 60" zones and beyond.

indicate the expansion each zone was introduced.

These zones are the starting areas for the goblins and pandaren. They are both zoned off, meaning only those races can even play; once the zone has been played and the characters leave, there is no way to return.

These zones are considered starting areas. Unlike the goblin and pandaren zones, other races can freely enter and partake of the quests, the sole exception being Gilneas. Gilneas is a worgen-only questing zone. Players of other races and worgen who have finished the experience may enter, but they will be met with an abandoned zone.

Up to level 60 (Neutral/Contested) Edit

All of these zones are considered neutral to both factions, though one faction may be more dominant than the other. Level requirements to pick up quests may vary, but all cap at level 60. These areas will flag players for PvP if they are playing on a Player vs. Player server.

Note that The Scarlet Enclave quests may only be picked up and completed by Death Knights; during this time, opposing-faction Death Knights are not flagged. Though any class and Death Knights that have completed the questlines may return to the area, it will be devoid of NPCs and mobs.

Up to level 60 (Alliance) Edit

These zones are leveling zones for the Alliance. These are considered secondary and tertiary leveling zones. Though they have differing level entry requirements, they all cap at 60.

These zones are leveling zones for the Horde. These are considered secondary and tertiary leveling zones. Though they have differing level entry requirements, they all cap at 60.

Ratchet in the Northern Barrens is considered a neutral town to both factions.

This zone is primarily for daily quests related to the Shattered Sun Offensive. Mobs do not scale to level here.

These zones span much of The Burning Crusade and Wrath of the Lich King. They each have different entry level requirements, but all cap at 80. Players may conceivably skip an entire expansion's worth of content, or go back and forth between the two.

Hellscream's Reach; Molten Front - Guardians of Hyjal), and the Veiled Stair that links the Valley of the Four Winds to Kun-Lai Summit in Pandaria.

These zones span much of Cataclysm and Mists of Pandaria. They each have different entry level requirements, but all cap at 90. Players may conceivably skip an entire expansion's worth of content, or go back and forth between the two.

Of note, Moonglade in and of itself is not a leveling zone, but is connected to several holiday events and questlines.

These zones encompass the entirety of Warlords of Draenor. Currently there is no way to skip this expansion's content.

Note that Ashran is a PvP zone, while Tanaan Jungle refers to the zone players return to after shutting down the Dark Portal.

These zones are part of the Legion expansion. Note that the last six zones are for max level players only, with the Broken Shore a later version than what players initially experience.

These zones are part of the Battle for Azeroth expansion.

Fandomania.com Top Ten Places in World of Warcraft Everyone Should See by Nikki Day Monday, August 22nd, 2011 at 5:00 pm

Retrieved from "https://wowwiki.fandom.com/wiki/Zone?oldid=2856590"
Community content is available under CC-BY-SA unless otherwise noted.