is a high-ranking member of the Twilight's Hammer clan stationed within the Twilight Precipice of Deepholm.

To defeat him, players must first engage him at his building, then follow him when he stuns them and runs. He will mount a dragon, and players will be provided their own to follow. Ranged classes can attack him from the back of their dragon while melee classes can use a provided leap ability to transfer to his dragon. If he isn't killed, the fight continues atop one of the floating rocks near the Temple of Earth. 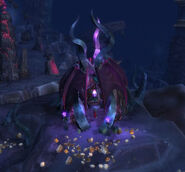 Zoltrik's building, with Zoltrik kneeling inside.
Add a image to this gallery