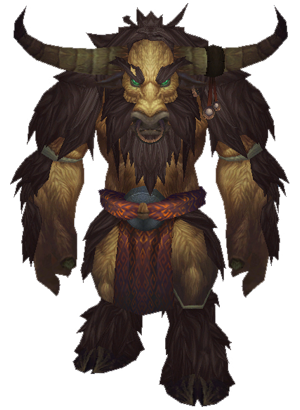 The Yaungol are descendants from the Tauren and native to Pandaria. They were actually separated from the Tauren during the Great Sundering over 10,000 years ago. Initially living within Townlong Steppes, they were driven out by the Mantid, and fight to this day to reclaim their land and survive in the Kun-Lai Summit.[1] They are aggressively looking for a new place to set up their homes[2] and have come in conflict with the Grummle in Kun-Lai Summit as a result.[3] They have also become a problem to the Alliance and Horde who have tried to setup in Binan Village which the Yaungol have under siege.[3] Like their ancestors, the Yaungol are quite tall and muscular.

Ten thousand years ago, a number of tauren tribes were stranded on the western slopes of the new Pandaren continent. Clever and hardy, forced to adapt to a harsh land, they were able to eke out a life in these dangerous environs. They became the yaungol. They counted the lands of the Townlong Steppes among their hunting grounds. There they roamed, in the dangerous wilds beyond the Pandaren wall.

Recent mantid attacks have led many yaungol warlords to the realization that the best hope for their people was to breach the wall and seek new homes in the safer environs of the Kun-Lai Summit. The Shado-Pan, outnumbered and already straining to fight off mantid assaults and a sha uprising, were unable to stop the incursion. The yaungol horde has arrived in Kun-Lai, bringing war with them. It now falls to the Alliance and the Horde to drive back the yaungol and aid the Shado-Pan in securing the breached wall.

The word "Yaungol" is a combined word coming from the terms Yaung and Mongol The term "Yaung" is used to describe the Indo-Chinese population living in North America after the Vietnam War from 1970 to 1990. It may also be a combination of Yuan Dynasty and Mongol. The Yuan dynasty was a Chinese dynasty founded by the grandson of Genghis Khan, Kublai Khan that lasted from 1271 to 1368. The term "Mongol" is used to describe the Central/North-Asian people inhabiting the area of what is now known as Mongolia, but can also be found in some parts of Northern China, Kazakhstan, South Korea, and in the Siberian regions of Russia. The Yaungol species themselves resemble the Asian Water Buffalo found in India, Thailand, Laos, Vietnam, Indonesia, and The Philippines. Their attire however resembles that of the nomadic Mongol tribes, particularly their leader Ghenghis Khan.Yaungol in Fire Camp Osul eat mostly yak and steppesbeasts. But unlike the Tauren who hunt their prey, the Yaungol keep them as cettle near their tents. 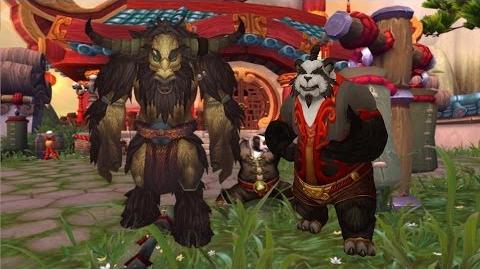 WoW Pro Lore - Song of the Yaungol (The Lorewalkers)
The Yaungol, Lorewalker Cho
Add a image to this gallery

Edit to the right of the section title.
Retrieved from "https://wowwiki.fandom.com/wiki/Yaungol?oldid=2738615"
Community content is available under CC-BY-SA unless otherwise noted.