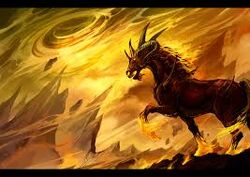 Xoroth is one of the fiery, chaotic worlds belonging to the Burning Legion, or more specifically, the Nathrezim, or Dreadlords. This is home to the infernal Dreadsteeds, mounts to the Dreadlords. They are owned by Lord Hel'nurath, the "stable keeper". Players will have to summon a Dreadsteed in a quest for a warlock's epic mount by opening a portal to this world in Dire Maul.[1]

Inhabitants of this world summoned to Dire Maul include Xorothian Dreadsteeds, Xorothian Imps, and Dread Guards.

It is possible that the Tothrezim also inhabit this world.

When fought in Onslaught Harbor, Mal'Ganis yells "Enough! I waste my time. I must gather my strength on the homeworld." This, and the Artifact from the Nathrezim Homeworld dropped by Mal'Ganis for

[80D] Proof of Demise: Mal'Ganis hints that the Nathrezim homeworld, be it Xoroth or not, may have a role to play in the future.

In The Battle For The Undercity, Varimathras has a "Master" on the far side of a portal represented as "A distant voice". This may be related the Nathrezim homeworld.

It's unknown if "Xoroth" was named after H.P.Lovecraft's planet Xoth, a demonic and chaotic star or planet where Old Gods come from.

WoW Insider Know Your Lore: The Warcraft cosmos, part one: The Material Plane by Anne Stickney May 22nd 2011 at 6:00PM

Retrieved from "https://wowwiki.fandom.com/wiki/Xoroth?oldid=2862517"
Community content is available under CC-BY-SA unless otherwise noted.