Xavius <The Nightmare Lord> encounter within

First of the Satyrs
Nightmare Lord

Lord Xavius was a powerful user of magic, and the high councilor to Queen Azshara.

Early life and the War of the Ancients Edit 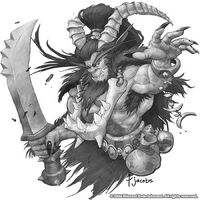 Lord Xavius High counselor to Queen Azshara over 10,000 years ago known for his lack of eyes which he replaced with ebony orbs streaked with ruby. With these magical eyes he saw far more than that of normal eyes.[2] He is perhaps the night elf responsible for the Burning Legion's interest in Azeroth. Xavius being the highest of the Highborne, who were tapped into the power of the well of eternity for some time, drew the attention of the burning legion. Being the first to make contact with Sargeras It was Lord Xavius who first became convinced that Sargeras, ruler of the Burning Legion, was a god sent to deliver Azeroth. having witnessed this God like being Lord Xavius,  Queen Azshara and the Highborne wanted to have the power to cleanse the land of imperfections and create a perfect paradise. Lord Xavius convinced the night elven queen Azshara of the necessity of turning the will of her mages, the so-called "Highborne", towards creating a portal into the Twisting Nether through which Sargeras and the Legion could enter the world. Lord Xavius was successful enough in his endeavors to welcome several ranking members of the Legion into Azeroth, including several felguard, Hakkar the Houndmaster, and Mannoroth, before the intervention of the young druid Malfurion Stormrage. As suggested by Azshara, Lord Xavius executed a plot to block any non-Highborne magic user from accessing the Well of Eternity. This allowed the Highborne to channel the extra energy gained into making the portal to the Twisting Nether strong enough for Sargeras to cross through. Lord Xavius' plot was ruined by Malfurion, who, after entering the Emerald Dream, destroyed the spell array holding the block and the portal, and in the battle that ensued, Malfurion destroyed Xavius completely.[3]

Lord Xavius’ master, Sargeras, was unhappy with him, and he faced punishment for his failures. Sargeras tortured Xavius’ disembodied spirit for a time, but eventually he showed a form of mercy. He decided that Lord Xavius could be of further use after all. He returned Xavius to life, but not as he once was. To mark the traits Sargeras valued in him, and to brand him forever as an ally and servant of the Legion, Sargeras transformed and disfigured Lord Xavius' body. He created a new body for Xavius: a body with cloven hooves, shaggy goat legs, goatlike horns, razor-sharp claws, and a long, leonine tail: a satyr.[2][4]

As the first of these beings ever to inhabit Azeroth, Lord Xavius is considered the progenitor of the entire satyr race. As such, variations of his name are found frequently in satyr settlements (i.e. Xavian in Ashenvale). As a satyr, Lord Xavius retained some resemblance to his former self along with the typical characteristics of all satyrs. Lord Xavius was unique, however, in that he retained the black and ruby eyes he had possessed as a night elf.

Lord Xavius had a two-pronged mission when he returned. First, he was to begin converting as many Highborne as possible into satyrs (the first was a personal friend of Lord Xavius, a dedicated Highborne named Peroth'arn), a task he accomplished with zeal by promising the unfortunate elves power and a place at the right hand of Sargeras. The second objective Lord Xavius was to complete upon his return was to bring back to Sargeras the one who had destroyed the portal,[5] Malfurion Stormrage. This second objective proved to be far more difficult and, in a confrontation during one of the most intense battles of the War of the Ancients, Malfurion, with help from a young night elf named Shandris Feathermoon, was able to completely defeat Xavius. Using an arrow shot by Shandris, Malfurion was able to kill Lord Xavius by growing a tree which absorbed his energy and body, which was subsequently sent to the bottom of the sea in the Great Sundering (the exact description of Xavius' fate in the novel The Demon Soul says, "Xavius was not so much becoming a tree — rather, his body was providing Malfurion's creation with the nutrients and building blocks to make itself."). This was the second time Lord Xavius died at the hands of Malfurion.[6] The victory came at a great cost, however, as during this confrontation, Malfurion's love Tyrande Whisperwind (High Priestess of Elune) was captured by Lord Xavius' remaining satyrs. In a furious rage, Malfurion almost drowned the entire night elven army in a torrential storm caused by his own sadness over the loss of Tyrande. Luckily Krasus intervened and stopped Malfurion.

However, it is unlikely for an eternal to be completely destroyed; they may regenerate or continue on in non-corporeal form. After the sundering of the world, the eternal satyr Lord Xavius sought to build his dark army without attracting Elune's attention.[7] Night elves still fear that he may yet be waiting to take his final revenge upon the Kaldorei.[1] The satyrs of Kalimdor's perverted forests worship Lord Xavius. He sows discord and mistrust, and his satyr children take their trickster natures from his guidance.[8] It is uncertain whether the satyrs still found in Ashenvale Forest and elsewhere are still directly following the will of the Satyr Lord, or merely following his path. Satyr tricksters, in particular, revere and mimic Lord Xavius' manipulations of his enemies.[9] Most satyr know he fell during the War of the Ancients, but continue to honor Xavius as their creator.[10] There still remain those of nearly every race hungry for power at any cost who worship Lord Xavius quietly but fervently, hoping that one day he will step out of the shadows to make them one of his minions.[9]

The tree containing the remains of Xavius' soul survived the Sundering through unrevealed means, though given his later state and presumed allegiance to the Old Gods, it is likely they intervened, much the same way they did for Queen Azshara. Ten thousand years later, Xavius came to lead the Emerald Nightmare as the Nightmare Lord. In this form, Xavius orchestrated the corruption of the Emerald Dream by manipulating Fandral Staghelm into planting a branch of Xavius' own tree into Teldrassil, ensuring that the new world tree would be corrupted from the start. His plans culminated in a daring attempt to bind Azeroth and the Emerald Dream into one plane, seizing control of Azeroth's residents while they slept and giving shape to their nightmares. He nearly succeeded, but ultimately was defeated by the re-awakened Malfurion Stormrage, who was assisted by Tyrande Whisperwind, Broll Bearmantle, Ysera, Eranikus, and a host of others. Malfurion sensed however, that while Xavius was strong, he was merely the servant of something even more powerful. The true master of the Emerald Nightmare has thus yet to be revealed.[11]

When in the form of the Nightmare Lord, Xavius is described as being a massive, gnarled tree, greatly obscured by the dark fog of the Nightmare. He delights in torturing Malfurion in various ways, both psychologically (such as showing him Tyrande, as the lover of Illidan, being turned into a demon) and physically (slowly turning him into a tree, for example).[12]

The beast-like creature carries himself with an elven grace, but hoofed goat’s legs and a long, serpentine tail hunch him forward. Red eyes peer out from the face of a handsome night elf noble, as his long, clawed fingers gather the ragged remains of a sorcerer’s silk robes around his shoulders. Though he is a monstrous creature, he is also strangely alluring, moving with a grace that seems almost supernatural…[1]

This section concerns content exclusive to the Warcraft RPG, and thus unlikely to be canon.This blade is a large, golden dagger magically crafted by Sargeras and granted to Lord Xavius to help him spread the curse of the satyr.[13] A critical hit from the Dirk of the Beast can transform others into satyr, regardless of race.[13]

Xavius and his satyr forces are found within Val'sharah on the Broken Isles, seeking to bring the Emerald Nightmare into the world.

Xavius once terrorized Azeroth with an affliction that almost obliterated the walls between reality and dream. His machinations ended in defeat, but he has been given another chance at vengeance. Now, Xavius leads the conquest of Val'sharah, where the tainted World Tree, Shala'drassil, spreads the Emerald Nightmare's corruption. With an army of vile satyrs at his command, Xavius will stop at nothing to vanquish all who oppose the Burning Legion.

Adventurers fighting the Nightmare in Val'sharah shall eventually take the fight to Xavius, venturing deep into Darkheart Thicket to vanquish Xavius' shade from the material realm.

While Xavius appears as a typical satyr in the real world, he is large and misshapen in the Nightmare, for it is his domain, and he can appear however he chooses. Xavius resides in and/or near the presumed source of the Nightmare, the Rift of Aln. [16]

Xavius Satyr form in Legion Alpha.[17]
Add a image to this gallery
https://www.youtube.com/watch?v=wlYT0IRZgBc

Xavius Satyr form. By Vaanel
Add a image to this gallery

Retrieved from "https://wowwiki.fandom.com/wiki/Xavius?oldid=2861436"
Community content is available under CC-BY-SA unless otherwise noted.