Mongrethod in the alternate timeline. Players take a portal to this chaotic world (chasing Gul'dan and Teron'gor) during the quest

Shortly after arriving at the "Remains of Xandros",

Mongrethod <Destroyer of Xandros>, then quickly retreat through another portal.

Lady Liadrin and the player defeat Mongrethod and step through the portal themselves, leaving Xandros. 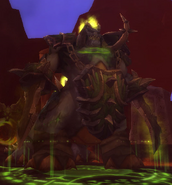 Retrieved from "https://wowwiki.fandom.com/wiki/Xandros?oldid=2862544"
Community content is available under CC-BY-SA unless otherwise noted.