Worgen are large, lupine humanoids reminiscent of a werewolf that walks upright, but lopes on all fours to run. According to sources held by the Forsaken, the Worgen come from another dimension, and exist only to terrorize and destroy. These creatures are thoroughly evil, delighting in torturing and devouring intelligent creatures. They enjoy hearing the screams of their victims as they tear them apart piece by piece. Worgen never show mercy or remorse. They may seem savage, but they are fairly intelligent and possess a cruel bestial cunning that can come as a surprise to the unprepared.[2]

Most Worgen keep their wolf-like forms at all times, but experiments by the mage Arugal have resulted in human/worgen hybrids who only appear as Worgen under the light of the moon. They carry with them a dark, corrupting malaise that grows wherever they infest, making the surrounding area dark and gloomy.

Worgen are among the few humanoids that can be skinned.

With the news of World of Warcraft: Cataclysm, the Greymane Worgen, who have developed a partial cure to the curse which allows them to retain their sanity even while transformed, have been announced as the sixth Alliance race.

Resembling a cross between a human and a dire wolf, the hunched-over creature is roughly humanoid. Its body is covered in coarse, grayish-black fur with twitching claws and snarling teeth. The creature’s eyes are mottled yellow in colour, unblinking and devoid of any discernible emotion other than hunger.[3]

Cursed beings from another dimension, Worgen only appeared in Azeroth as the result of magical mishaps. True aberrations, they are accidentally drawn through temporary rift tunnels and deposited in this world with no apparent way of returning. Absolutely nothing is known about the Worgen’s home realm, or even precisely how to spawn the rift tunnels through which they come.[3]

Worgen are usually encountered in small packs near sites of recent intense magical activity.[3] A pack may contain four to twelve individuals.[4] A Worgen tribe may contain between twenty and two hundred individuals.[3] Fiercely territorial creatures, they rarely stray from the general vicinity of the place in which they first appeared. Fearless beasts, they brazenly prowl near both villages and monster lairs. Although Worgen display an apparent fondness for nighttime and its darkness, they can perform equally well in the daytime.[3]

Pure savage beasts, Worgen tend to attack any creatures that they encounter, regardless of whether their unfortunate prey is animal, humanoid, undead, or something even more fearsome. Strangely, however, Worgen refuse to feed on the remains of their victims, preferring to shred and tear the corpses and then to return immediately to prowling. Rumors suggest that worgen somehow receive sustenance continually from their native dimension... as well as guidance from a distant force.[3]

Worgen prefer to hide in shadows before leaping great distances upon their foes. They attack with feral tenacity, slashing with their deadly claws and biting with sharp, infectious fangs. Worgen are nearly fearless and typically fight to the death, relying on their regeneration to save them.

The saliva of a worgen carries a dangerous infection that can prove deadly against those who are bitten.[3]

The worgen hail from a dark and treacherous world, from which there is no corner which is truly safe. There, the worgen battle their unflinching enemy in a vicious war; the Lords of the Emerald Flame. Ur, a mage of Dalaran, did research on worgen but never summoned them. Frustrated by the destruction of Dalaran by the Scourge and against the advice of his peers, Archmage Arugal elected to summon an army of the extra-dimensional entities by using Ur's research. The summoned worgen fought against the undead armies, but quickly turned on the wizards themselves. Driven mad with guilt, Arugal adopted the worgen as his children and retreated to the newly dubbed Shadowfang Keep, where he then cursed the village people of Pyrewood to turn into worgen whenever the sun went down.

At approximately the same time, the night elf Sentinel Velinde Starsong was given the task of clearing Felwood of demons. She prayed to Elune and was granted a magical scythe which could summon worgen. Using the Scythe of Elune, she summoned a very large number of the creatures to fight at her side against the demons. Later Velinde began to notice that some of her force were unaccounted for. It was as though the Scythe of Elune no longer required her presence to perfom the summoning process. Perplexed by this development, she ordered the remaining worgen to remain at the Shrine of Mel'Thandris in Ashenvale and began to search for Archmage Arugal, whom she had heard also summoned worgen. From that point on her fate became a mystery, but it was rumored that she was killed in Duskwood and lost the Scythe of Elune. Black Riders from Deadwind Pass came to Duskwood looking for the Scythe and murdered a family of farmers in the search to find it. It is also known that the dark mage Morganth was searching for the Scythe of Elune, and stole Ur's Treatise on Shadow Magic as well.

In World of Warcraft: Wrath of the Lich King, Arthas has discovered Arugal's activities and has brought him back from the dead to work for him. This also means that there are a lot of worgen allied with the Scourge in Northrend and in particular, the Grizzly Hills.[5] [6]

In World of Warcraft: Cataclysm, it is revealed that the worgen curse has spread into secluded kingdom of Gilneas, transforming its inhabitants into the worgen. More recent evidence suggests that their true origin might have a connection to the night elves and a secretive druidic order from Kalimdor's distant past. Many believe that a treatment for the worgen curse may exist, although others have nearly given up, fearful that if the barricades should fall, their humanity will be lost forever.

The curse originated from the druidic sect who followed Goldrinn, known as Druids of the Scythe. They shapeshifted into the feral Worgen and eventually lost their minds to its violent nature. The other Druids agreed that they must be locked away, and thus put them into eternal slumber deep beneath a tree... until the day Arugal and Velinde Starsong tampered with the Scythe of Elune. It was the night elves, after all, who created the curse in the first place. Obliged to help their newfound allies, they re-introduce them to the Alliance.[7]

The worgen bear a strong resemblance to the "Myrkridia" from Bungie's Myth II: Soulblighter (a contemporary of Warcraft I and II), especially the idea of them being from another dimension.

Garwal was a tamable pet during 3.1 until a hotfix was deployed on 7 July, shortly after the discovery was widely known on the internet. During this time, the tamed Garwal pets were no longer an effective pet as they were stripped of their abilities and could not even be fed.

Zarhym responded on the forums shortly after the hotfix with this statement:

Re: Worgen pet. | 2009-07-07 22:49 | Zarhym
The worgen should not technically belong to any of the pet families and was therefore removed. This means the pet no longer has access to pet talents or abilities. Whether or not similar circumstances with hunter pets in the past have occurred isn’t really relevant. Given the nature of the creature that was tamed in this case, we feel it should not belong to any of the eligible pet families from which a hunter can choose his or her combat companion.

...We don't want hunters to have worgens as pets. That is the reason whether you find it reasonable or not.

Only 21 July, the Garwal skin (appearance) was changed to a normal white worg for all players who had tamed him, and normal pet abilities were restored for those players. 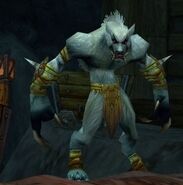 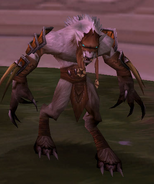 Retrieved from "https://wowwiki.fandom.com/wiki/Worgen?oldid=2308916"
Community content is available under CC-BY-SA unless otherwise noted.