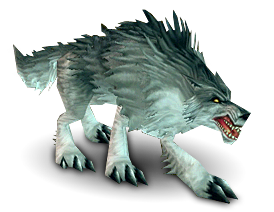 Wolves are carnivorous, furry, canine beasts that often run in packs. Wolves encountered in the wilderness are typically hostile and attack those who approach them too closely. Diseased, sick wolves of Elwynn Forest tend to keep to themselves and not attack travelers, because they are sick and weak. Oddly, the Diseased Wolf of Western Plaguelands will not hesitate to attack anyone, probably because the plague drove them into a frenzy, making them attack everything on sight.

Wolves are indigenous to many parts of Azeroth. They live on every known continent and have a wide variety of subspecies and social habits. Although most are hostile toward anyone who trespasses on their territories, a few unique dire wolf packs have befriended the Horde in recent years. These cunning and ferocious creatures have found an especially welcome home among the orcs, who admire their endurance and keen survival instincts.[1]

They live in Elwynn Forest, the Hinterlands, Mulgore, Duskwood, Silverpine Forest, the Badlands, Tirisfal Glades, Dun Morogh, Felwood, Burning Steppes, Ashenvale, Feralas, the Western Plaguelands, Blackrock Spire, and Shadowfang Keep. Draenor gave rise to its own separate species of wolves that developed independently on that world. Many survived Draenor's destruction and transformation into Outland and can be found in Hellfire Peninsula, Terokkar Forest, and Blade's Edge Mountains in Outland.

Wolves and the Horde

Wolves are a major symbol of the Horde, especially to the orcs. They serve as guards, scouts, pets, and partners. The large cousins of the wolf, the worgs, are used as the orc mount. Many such wolves came from Draenor with the orcs, others were natives of Azeroth.

Orcs and other Horde shamans hold them in high regard. They can speak to them and summon spectral wolves, some serve a giant wolf spirit.[2] Their armor also often has a wolf on it.

The Frostwolf clan of Alterac has an especially close connection to the native wolves, and two giant wolves, Duros and Drakan, who guard their chieftain.

Wolves are a popular pet due to their large variety of skins and locations. Worgs, when tamed as a hunter pet, are in the same category as wolves and have the same skills. Wolves are ferocious pets.

Though hunters can respec their pet wolves into Cunning or Tenacity, they are inherently Ferocity. In addition to the abilities that come standard with all pets ([Growl] and [Avoidance]) and those given to their natural or retrained specialization, all wolves are given the following:

The subspecies below can be tamed by hunters. Human hunters start with a pet wolf.

It is possible that large wolves were also indigenous to Outland and were domesticated by the uncorrupted orcs. When Kil'jaeden forced the orcs to assault Azeroth, they brought the wolves with them. After the old Horde was scattered and destroyed, wolves adapted and settled in their environment. They were also taken to Kalimdor on orcish ships to help as defense.

Retrieved from "https://wowwiki.fandom.com/wiki/Wolf?oldid=2839328"
Community content is available under CC-BY-SA unless otherwise noted.