Were you looking for Cloud serpent mounts? 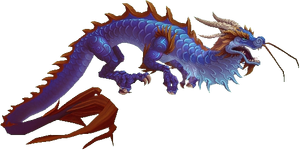 Cloud serpents are a type of flying, snake-like creature raised and trained by the Pandaren.

The true origin of the cloud serpents is unknown. According to Loh-Ki, a supernatural storm was summoned by Lei Shen, the Thunder King during his final moments which blanketed the Vale of Eternal Blossoms with rainfall and struck jagged spears of lightning into the hills. As it dissipated, the storm struck the center of the lake, igniting the very water itself. The lake burned crimson for many days. When the flams finally subsided, a cloud serpent hatchling could be seen flying around the center of the lake. Its scales sparked with storm and fire, and where it flew, great clouds formed in the sky. The Pandaren named it Alani, the Stormborn. Millennia ago, the cloud serpents were feared by the Pandaren as monsters and wild animals, who viewed them as cunning and savage beasts. During the Troll Wars, just after the founding of the Pandaren Empire, a young girl named Jiang took a small cloud serpent in to her care. The Zandalari forces were many, and their bat riders fought in such a way the Pandaren were not accustomed to. Jiang and her cloud serpent however managed to outmanuver the bat riders and strike at the Zandalari ground troops. The war would still take several more months to win, but the cloud serpents gave the Pandaren the edge that was needed to overcome the trolls. Soon Jiang began to train other Pandaren on how to tame and ride as she did, upon the backs of other serpents. From then on, the cloud serpent embodied a symbol of hope to the Pandaren people, and the Order of the Cloud Serpent was founded.

Cloud serpent eggs are rare and resemble jewels, and were once worth their weight in solid gold. The serpents are known to lay their eggs in nests at only two places in Pandaria: on the beach of Shan'ze Dao and on Windward Isle, off the east coast of the Jade Forest.

The cloud serpents in the wild live in a delicate balance with nature. Their eggs are quite vulnerable to enemies. Recently the nests of the Jade Forest have come under attack by the Saurok. The Saurok are cautious and fearful of the adults, but the prospect of an easy meal is far too appealing. Soon they began to snatch the eggs under the cover of night. At present the vile Saurok slaughter adults and hatchlings alike and eat their eggs for dinner.

Edit to the right of the section title.
Retrieved from "https://wowwiki.fandom.com/wiki/WoWWiki:Cloud_Serpent?oldid=2842708"
Community content is available under CC-BY-SA unless otherwise noted.