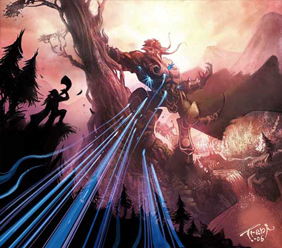 Wisps are fey nature spirits who build night elf structures and gather resources. Wisps have the power to detonate, causing a backlash of mana, and can become Ancients. Several thousand of them, known as the Ancestral Spirits, gathered at the call of the Horn of Cenarius to Nordrassil to destroy Archimonde.

Wisps are ancient spirits of nature that inhabit the forestlands of Kalimdor. Legends say that Wisps are actually the disembodied spirits of deceased night elves, but these rumors have yet to be proven. The wisps act in unison with the night elves and serve to strengthen the demigod-like trees known as the Ancients. Beckoned by the night elves, Wisps are capable of animating various trees and expanding themselves into rough-hewn structures of living wood and stone.[1]

Wisps are mysterious “forest spirits” of unknown origin. Wisps are forest spirits that heal ancients and keep the forest clean and pure. They are dedicated to the well-being of night elf forests. They are connected to the forest on a supernatural level rivaling that of Cenarius’ children; indeed, many believe that wisps often evolve into mighty ancient protectors and other creatures. Wisps play a major role in night elf life by creating and repairing their wooden structures. In addition to healing living wood with their mere touch they can detonate themselves to banish or kill summoned monsters (such as any outsider, elemental, or several kinds of undead). Wisps show little intelligence, free will or self-interest. They appear to exist purely to serve the will of the night elves. Whether this is reality or whether they serve the night elf leadership out of some personal agenda or sense of duty is unclear at this time. A tremendous number of wisps were destroyed at the end of the Third War in Malfurion’s gamble to destroy Archimonde. As a result, they are nowhere near as numerous as before the Third War, but nevertheless they play an integral part in the lives of all night elves. Some human scholars think that wisps are the souls of deceased night elves, but these claims have yet to be proven, and are met with near mockery among the night elves. The glowing ball of light hovers a few feet off the ground. Within the eldritch glow, inside can be seen the translucent features of an elven face.

Wisps avoid combat and will flee when attacked if they can. Instead, they follow night elf orders, which usually means they act as support troops, healing ancients and repairing night elf structures. They detonate if ordered to do so, or if they cannot flee. If pressed, they slam into mortal foes or detonate themselves to destroy or banish outsiders or undead. A wisp may sacrifice itself to seed an ancient. It takes decades for the ancient to grow to maturity and centuries before it reaches its full potential. Wisps have the ability to safely extract wood from a tree without damaging or harming the plant. This is a slow process, but over the course of a day, a single wisp can produce about 20 pounds of lumber from a large tree. Wisps have the capability to mold wood into nearly any form. A wisp can change the shape of up to a 5-foot cube of wood, shifting the wood’s dimensions at will. This potent ability allows wisps to swiftly create structures for the night elves. A wisp can sacrifice itself. Creatures within 30 feet suffer the simultaneous effects of the spell's banishment, dispel magic, and mana burn. A wisp may heal an ancient, plant or wooden structure. The wisp must touch the plant or structure, to heal it.[2] [3]

In late March 2006, wisps were announced to be the new race for the Alliance in the upcoming expansion, World of Warcraft: The Burning Crusade. The announcement, however, was an April Fool's joke. The real new Alliance race was eventually announced as the draenei.

A wisp is a special ghost form available to night elves based on a racial ability that allows faster travel when dead to get to their corpse. A wisp looks like a misty, glowing ball of light, with a vaguely discernible night elf face, that floats some distance above the ground.

This section concerns content that is out-of-date. Reason: Midsummer Fire Festival has been annual for awhile and Spirit of Summer can be purchased with tokens.

During the Midsummer Fire Festival in 2006, players could complete the quest A Light in Dark Places, which rewarded the player with a

[Captured Flame]. The Flame could be used to activate a non combat pet called Spirit of Summer — which had the appearance of a red wisp. It is likely an elemental sprite.

The Midsummer Fire Festival re-ocurred in 2007, and the same quest was required to get the Spirit of Summer. It should be noted that a reasonably well-geared level 70 player (preferably pure DPS or a high-armor healer i.e. Shaman or Paladin) was able to solo through the four instances to get the pet, provided that they had the keys to open the instances.

A wisp can be found each elven ship to help guide the vessel to its destination and also search for lost souls.

Retrieved from "https://wowwiki.fandom.com/wiki/Wisp?oldid=2821939"
Community content is available under CC-BY-SA unless otherwise noted.