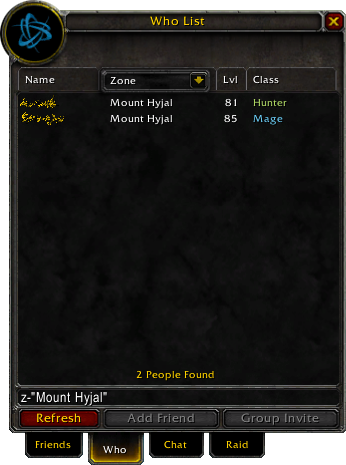 The Who List is a component of the default WoW User Interface.

Second pane and second tab at the bottom left of the initial Socials window that lists Players that you can track in the game. When you click the Who tab, it becomes the Who List window. Also called the "Who pane".

; default key shortcut of O) in the upper left of the chat window and then click the Who tab at the bottom.

Alternatively, you can access the Who List by typing the /who  slash command into the chat window: this method will generate a default search of characters close to your level in the current zone (for example, a level 10 character in Darnassus would get z-"Darnassus" 7-13 by default after entering /who ).

Most of the Who List' pane consist of the list of Players, each entry showing the following info:

At the bottom, the Who List pane also has a Query Entry Field and 3 buttons:

The other panes accessible from the Who List window:

You can search for players by name by entering part or all of their name in the Query Entry Field. You must enter at least three characters of the player's name. The characters can be any part of the name, as long as they are in order: a search for lis might return "Lissa", "Elisha", or "Cutliss". If you do not specify any flags, the who result will return all matches with names, guilds, zones, race and classes.

Search only in player names with the following query:

Search only in guild names with the following query:

You can get a list of players in a specific Region (a.k.a. Zone) with the following query:

You can get a list of players of a specific Class with the following query:

You can get a list of players of a specific Race with the following query:

These can be combined; a search for

would return a list of human Priests in Ironforge, of levels 30-40, with "lis" somewhere in their names.

Press the Refresh button to update the Who list based on the current query string. 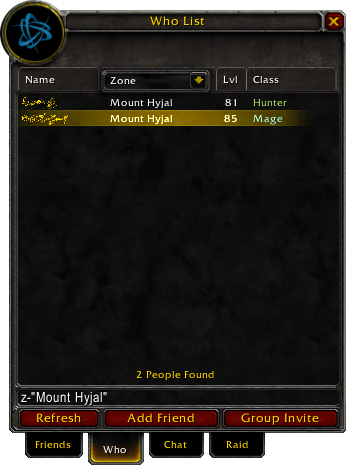 A simple way of adding a character to your Friends List. Just select the character's name in the Who List, and then click the Add Friend button.

A simple way of adding a character to your Group. Just select the character's name in the Who List, and then click the Group Invite button.

Retrieved from "https://wowwiki.fandom.com/wiki/Who_List?oldid=2846211"
Community content is available under CC-BY-SA unless otherwise noted.