Weldon Barov[44, 84] <House of Barov> is a level-60 quest giver located at Chillwind Camp in the contested territory of Western Plaguelands. He appears to be on a 30-minute respawn timer.

He is one of the two "surviving" (if such can be said about his Forsaken brother, Alexi Barov) descendants of the Barov family. As such, they are both heirs to the Barov family fortune. Although it is unknown how exactly they intend to deal with obtaining that fortune - since most of it is probably still buried somewhere within the treasuries of Caer Darrow - the brothers nonetheless strive for the four deeds that can be found somewhere in Scholomance. This inheritance has made them enemies, and Weldon will stop at nothing to become the only one surviving heir to the Barov fortune.

Wheldon as a Garrison Follower

On Draenor, if Alliance players have built a lumber mill in their garrison and are out cutting timber with the shredder, there is a chance they will uncover Weldon Barov, who has been stuck under the tree. He offers players a quest to kill his brother and enemy Alexi, who will be found in the vicinity of a lumber-worthy tree. After stumbling across Alexi Barov while gathering lumber (and killing him), players can turn in the quest to gain Wheldon as a follower at their garrison. 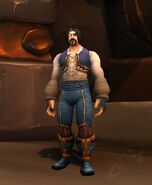 Weldon Barov in World of Warcraft.
Add a image to this gallery

HELP! ASSASSINS HAVE COME TO KILL ME! (When attacked)

Retrieved from "https://wowwiki.fandom.com/wiki/Weldon_Barov?oldid=2738447"
Community content is available under CC-BY-SA unless otherwise noted.