A Rogue with Two Sides Edit 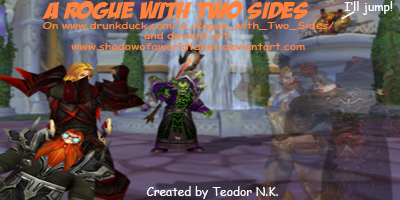 Beyond the Tree Edit

Following an odd duo of Night elves, Beyond the Tree is a story about finding yourself and finding a purpose in the world. It aims to be both serious and light-hearted, mixing in all manner of quips, puns and references where possible. Utilizing 3D graphics for character art, a heavy focus is put in making the characters expressive and readable.

Blood and Blunder follows the travels of Tauren Warrior Tankamoo, and Orc Shaman Shock'Thas throughout the altered World of Warcraft!

By Way of Booty Bay Edit

Chronicles of the Flaming Ruby Edit

Complex Actions focuses on the RPG world as whole, from table top to WoW.

Follow along as Cru, a demented dwarf with a questionable grasp on reality, his level-headed elf healer and a sociopathic warlock explore the World of Warcraft.

Join Vas and Fyre on their quest for fame, fortune, and all that sort of thing! From the simplest of daily quests to the most epic of encounters, the whimsical nature of this comic and these characters will have you coming back again and again and wondering just how strong of a bond you can form in World of Warcraft.

Danesar of Daggerspine, is a online WoW webcomic about the VERY naive and trustfull warrior by the name of Danesar and his guild "The Blade Order". The story takes place on the realm server of Daggerspine, which seems to have come under seige by a very very mysterious force. Thou at most times this is comic will put a smile on your face, your sometimes left with a kind of "what just happend?, and was that funny?" feeling, due to the creator's heavy influence by the notorius black Danish humor. But still a very good read.

Demon Slayed tells the story of a young Blood Elf whos life is about to change when he is summoned by his old master Reildar.

Dragontouched tells the story of Autumnflare, a high level feral druid who finds a mysterious stone in a cave in Winterspring. She is drawn to touch the stone, which sets in motion a sequence of events that leaves her permanently changed. From the realms of Outlands to the depths of Blackrock Mountain and the icy wastes of Northrend, she must leave no stone unturned if she is to escape the fate planned for her by forces she can only barely begin to understand.

Equinox: Defender of the Horde Edit

Flintlocke vs. The Horde Edit

Hefs Adventures follows a Dwarf called Hef and his Night Elf sister. As they travel the world, and their party grows, they come across friends, foes, an unlucky raper and some random gnome, that keeps showing up.
Will return once WoWmodelviewer is working again.

Looking For Group is one of the top WoW online webcomics. It is about a hunter trying to find his place in the world by helping others and a dark warlock, named Richard, who accompanies him in his journey. There are more characters that join this group who make the comic interesting, funny, and eventful.

No longer a WoW only Comic.

Out Of World Edit

Out Of World is an occasionally serial, occasionally one shot web comic based in the World of Warcraft. It follows the trials and tribulations of a variety of characters ranging from Azeroth’s most demon plagued paladin to Ironforge’s only playboy gnome warlock and a little bit of everything inbetween.

While light-hearted this webcomic is more ‘serious’ than most, dealing with the activities of the Phalanx Initiative and the lives of its members as they investigate the use of unknown, ancient or demonic magic and technology.

QUEST is a world of warcraft comic featuring an annoying and slightly perverted gnome named Quinn along with his trusty human priestess named Uni as they venture in the world of warcraft trying to find a cure for the plague. It only has about 25+ pages as of now(May 2009) but already contained action pages. Ranging from rogues shadowstepping to mage fireballing and shadow priest face melting.

Tales from the Crossroads Edit

The continuing adventures of the IQF (Impossible Quest Force) from its secret base in The Crossroads. An adventure/comedy webcomic featuring Tokkar, an orc of sophistication, and his friends Jekk, Fiera, Rolf and Oln'a.

Follow Azarizotza, Xandaria and Solstia through their journey through Azeroth, almost like the Three Stooges of the World of Warcraft.

Thron's Journey tells the story of a flatulent, irreverent, decidedly likeable Tauren oaf named Thron. The comic has just been renewed, so there are only just a few pages at the moment.

The humorous, and quasi-dramatic exploits of Zieromus the curmudgeonly veteran warlock, his incompetent henchmen and the constant string of cataclysms thrown his way, with a absurd blending of lowbrow boob jokes combined with highbrow wordplay dumped into it. 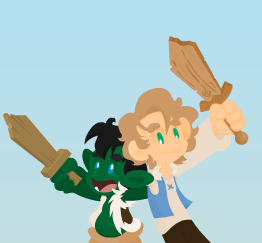 Tucked away in a secret valley, surrounded by thick woods and tall mountains, lies a special school and home - a place where lost children of Azeroth can live and learn together, safely hidden from the rest of the world and it's warring factions.  Each child brought to this school has a very special destiny, and though they don't know it, are intended for great things.

World of Warcraft, eh? is a WoW comic with a Canadian overtone. Varies between "gag-a-day" comics and actual story arcs, with the focus being gag-a-day (only two arcs so far).

The webcomic revolves around the adventures of Summery of Cadistra, a Tauren Feral Druid and Kissless Stormcrow, a Blood Elf Protection Paladin.

World of Zach, is a pure comedy train ride through Azeroth seen through the Tanarian, Zach's eyes, and how he must find his place in this world. The comic features many funny small intermissions and pure genius moments, for instance? did you know there is a gnomish mob? The comic is very well made and though the creator is Danish, the humor through out it very understandable and funny for everyone. A very good read if your feeling blue, because if this doesn't put a smile on your face, nothing will.

Retrieved from "https://wowwiki.fandom.com/wiki/Webcomics_related_to_World_of_Warcraft?oldid=2804367"
Community content is available under CC-BY-SA unless otherwise noted.