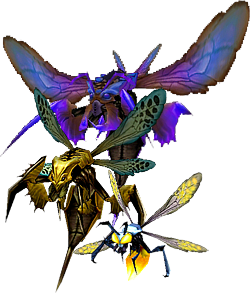 The pet family wasp refers to the fireflies added in the Burning Crusade expansion and later, to the wasps of Sholazar Basin added in the Wrath of the Lich King expansion.

Though hunters can respec their pet wasps into Cunning or Tenacity, they are inherently Ferocity. In addition to the abilities that come standard with all pets ([Growl] and [Avoidance]) and those given to their natural or retrained specialization, all wasps are given the following:

See this subject on the Hearthstone wiki: Giant Wasp

Retrieved from "https://wowwiki.fandom.com/wiki/Wasp?oldid=2829105"
Community content is available under CC-BY-SA unless otherwise noted.