Warlord Thresh'jin
"combat" is not in the list of possible values (Alliance, Horde, Neutral, Combat, Boss) for this property.

Warlord Thresh'jin is a level 58 rare mob forest troll found in the Eastern Plaguelands. He spawns top of the temple in Zul'Mashar, and has 4,000 hp.

Thresh'jin is the leader of a forest troll force from Zul'Aman has also moved into the region of Eastern Plaguelands. Striking south from Zul’Aman, the trolls seek to regain their ancestral kingdom. Thresh’jin and his army, intend to drive the Scourge from the land. It does not matter that the land is dead; Thresh’jin wants it because it used to belong the forest trolls, and he intends that it will be so again. Zul’Aman’s warbands back Thresh’jin, so he’s got many trolls.[1]

Thresh'jin appears to be one of several Warlords from Zul'Aman, that control the region. These also include Jin'zakk, and Zul'Jin. 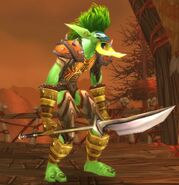 Former model
Add a image to this gallery

Retrieved from "https://wowwiki.fandom.com/wiki/Warlord_Thresh%27jin?oldid=2614718"
Community content is available under CC-BY-SA unless otherwise noted.