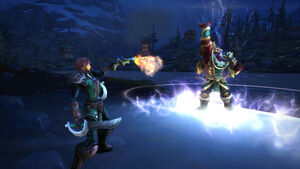 War Mode is a new mode of gameplay coming to World of Warcraft in the Battle for Azeroth expansion. It is intended to replace the concept of Player vs. Player servers.[1]

With War Mode, all servers will be converted over to the same type, and there will be no dedicated PvP servers. Instead, once players reach level 20 they can visit their Capital City (Stormwind City/Orgrimmar) and toggle whether they would like PvP to be enabled for their character. If so, once they step outside their city, any other player with PvP enabled will be able to attack them, and vice versa.

Due to the fact that players with War Mode enabled will likely spend more time battling other players, perks are to be added. While not all of them are currently known, they include: 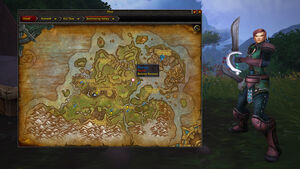 Players can become infamous in War Mode by killing a certain number of players of the opposite faction without dying. Once they do, they’ll achieve the status of Assassin and gain an increase to damage and healing by 15%.

The more players an Assassin kills, the more likely they will show up on the zone map for other players to target and kill to gain a bounty. Players who successfully kill an Assassin of the opposite faction will receive Conquest points as well as other rewards. There can be three (or potentially more) Assassins on any Battle for Azeroth zone map at a time, providing plenty of opportunity for players—or groups of players—to take their revenge on the opposite faction’s Assassins. 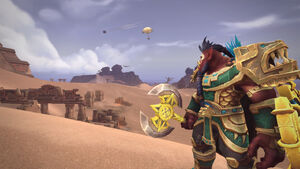 From time to time, a flying machine will make its way across the sky. A War Supply Crate to drop somewhere in the zone. Similar to the chest in Gurubashi Arena, players can fight over the crate and claim it for their faction. Once a faction has gained control of the crate, anyone of that faction who is within the area will have a short period to open it and collect a piece of personal loot.

Retrieved from "https://wowwiki.fandom.com/wiki/War_Mode?oldid=2849517"
Community content is available under CC-BY-SA unless otherwise noted.