Vrykul (pronounced ['vraɪ.kʊl]) are a race of heavily Nordic-themed half-giant warriors native to the Howling Fjord, located primarily in southeastern

Northrend. It is said that in ancient times the vrykul race inhabited the land, founding a vast and prosperous civilization. Suddenly one day, without warning or explanation, the vrykul race vanished, leaving behind only deserted villages and abandoned temples. Due to the encroachment of the Alliance settlement of Valgarde on their lands, vrykul have recently returned.

Led by King Ymiron, these formidable warriors have begun attacking Horde and Alliance settlements from the fortress of Utgarde Keep, not far from Valgarde. Vrykul motives and their whereabouts for the past several thousand years remains a mystery, though they have recently become allied with the Lich King, accepting him as their "Death God". However, a few vrykul have joined the Twilight's Hammer clan in the Twilight Highlands.

Vrykul are brutal in nature, and are served by worgs and a similarly mysterious race of proto-dragons. They practice a runic magic that even the most experienced wizards find unfamiliar. For some reason, they frown on manual labor, thinking it lowly.[2]

The quest Anguish of Nifflevar states that vrykul children born in a certain time after their gods "abandoned" them were "weak and ugly". King Ymiron ordered all those children to be killed, but events observed in the preceding quest The Echo of Ymiron imply that not all of the parents obeyed this order, instead hiding their children in order for them to grow up far away from Northrend. These vrykul largely migrated to the region that would later be known as Tirisfal, where over time, they gradually evolved into modern humans.[3] As stated by Thoralius the Wise: "There is no extinct 'missing link' to humans as the Explorers' League proposed. The vrykul are the missing link. They are the progenitors of humanity".

A dialogue uncovered by Brann Bronzebeard in Ulduar lists the vrykul (along with the earthen and the giants) as "seed races", implying that they are direct creations of the titans as opposed to having evolved from some other race over time.

A few subraces of vrykul exist. The only currently known ones are:

A race of half-giants to which humans are connected.

Have stone or metal-like skin with engraved runes. Sjonnir The Ironshaper appears to be this type of vrykul. Iron vrykul serve the titan Loken, as well as his master, Yogg-Saron. They are not true vrykul, however, as Loken created them from a saronite/iron alloy and so they are more akin to earthen.

Have blue skin and are covered in ice. They are adapted to living in the colder areas of Northrend.

Having gold skin, these Vrykul were chosen to serve as Odyn's finest champions of the Valarjar.

A fleshy variation, covered in green scales and barnacles; they are almost entirely aquatic. They come from an unknown location and attack the beaches of southern Northrend. Additionally in a chain of flashbacks beginning with

[81] Visions of the Past: The Invasion of Vashj'ir, Varkul the Unrelenting leads a huge army and claimed the then abandoned Ruins of Vashj'ir. Both he and his kvaldir were defeated by an army of naga led by Lady Naz'jar and Fathom-Lord Zin'jatar.

Incorporeal undead raised from vrykul females. The inhabitants of Valkyrion aspire to this transformation.

Vrykul brought to undeath that weren't found worthy by the Lich King.[4] They are the losers of the challenge to "ascend" at Jotunheim. The winners are the Ymirjar.[5]

An organization exists of both live and undead vyrkul.

Not a type, but an organization of frost vrykul loyal to the Lich King. They are the winners of the challenge to "ascend" at Jotunheim, but for some reason has vargul members. 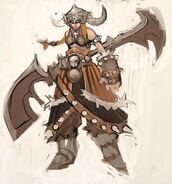 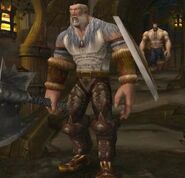 A vrykul fighting a dwarf warrior in Utgarde Keep in The Wrath of the Lich King Alpha. 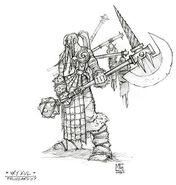 Gjalerbron's banner?
Add a image to this gallery 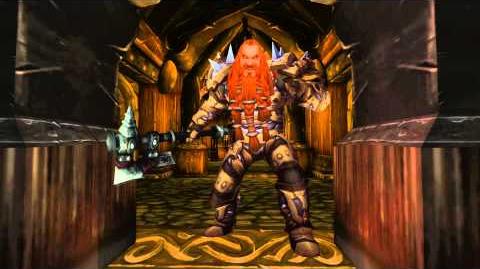 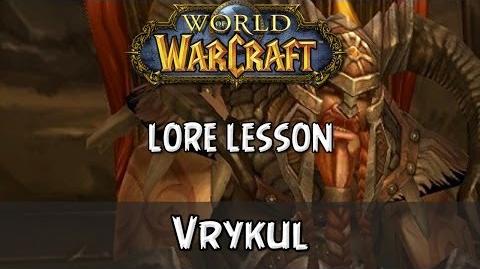 Allied Race Vrykul - Would It Work? - Customization, Gear, Faction & More
Add a image to this gallery

Retrieved from "https://wowwiki.fandom.com/wiki/Vrykul?oldid=2863552"
Community content is available under CC-BY-SA unless otherwise noted.