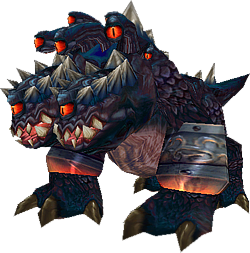 Void terrors (sometimes called "void hounds") are Core Hound-like demons that are members of the Burning Legion. These beasts possess a nearly unlimited source of demonic energy. The only known void terrors residing in Azeroth are Immol'thar found within Dire Maul in Kalimdor and Occu'thar found in the Baradin Hold raid in the Eastern Kingdoms. A large number of them have been sighted in Outland, guarding certain regions of the Blade's Edge Mountains and prowling the Netherstorm.

Retrieved from "https://wowwiki.fandom.com/wiki/Void_terror?oldid=2861228"
Community content is available under CC-BY-SA unless otherwise noted.