Voice over Internet Protocol (aka VoIP) is a method of transmitting audio over the Internet by encoding analog audio in a digital form, transmitting it over the internet, and decoding it back to analog form for listening. It is also known by the acronym "VoIP".

Many guilds in World of Warcraft have access to dedicated VoIP servers to help make communication during raids easier. Two of the most popular 3rd party VoIP clients are TeamSpeak and Ventrilo, although Mumble has recently become very popular. 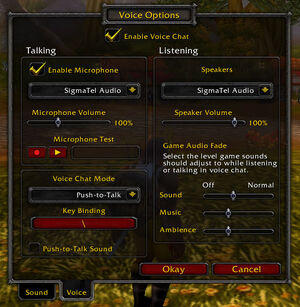 As of 19.07.2018 at Patch 8.0.1, this section is outdated. The old Voice Chat implemented in 2.2.0 has been replaced by the new Voice Chat after the introduction of the "Communities" feature. Official Patch Notes state:

"(...) You can now create and join cross-realm social groups in World of Warcraft. Communities make it easier for you to find and play alongside adventurers who share common interests. Hit default hotkey ‘J’ to get started.

Voice Chat is now available in all groups, Guilds, and Communities. Select the headset icon wherever you see it in game to talk with other players. (...)"

This article will be reworked. Below is the outdated entry until a new one has been written. 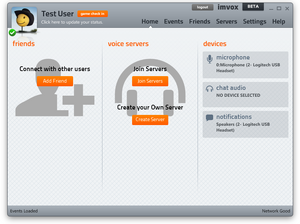 Imvox is another Voice over IP (VoIP) software released under a proprietary license on Windows and OS X. The makers have licensed Skype's Skypekit[2][3] SDK to bring the capabilities of Skype to gamers. Unlike Skype, however, which becomes significantly more demanding with larger voice conferences, Imvox mixes everything in the cloud on servers they host. This means a single audio stream from their servers for lower bandwidth and CPU usage, but maintaining Skype-like quality with the SILK codec. The Skypekit also provides echo cancellation for use without headsets and smart firewall traversal, making it easily usable on campus and professional networks.

Also, unlike Skype, Imvox supports conferences of up to 200 users per channel, a tiered tree like Ventrilo to organize users, assignable push-to-talk (PTT), individual muting of users, microphone normalization.

Server management is done through the desktop client and any user can create/customize their own server, which is currently free and hosted by Imvox so no external server is required.

Mumble is a free/open-source voice chat application for groups. While it can be used for any kind of activity, it is primarily intended for gaming. Mumble has very low latency combined with good sound quality; it uses Speex extensively, not just the voice compression technology, but also the voice pre-processing to remove noise and improve clarity. Mumble is open source, which means the source code is freely available, servers don't require a license, and people who are software savvy can alter the code and contribute to the project.

Mumble is able to sound much clearer then its other voice applications thanks to de-noising. This is a standard part of Speex 1.1 and above. Removing the noise from the input means that the audio will be clearer and that the needed bit-rate will decrease.

The client runs on Mac, Linux or Windows. The server is mostly bandwidth bound, so as long as your network hardware is sufficient it should run on pretty much anything.

Mumble has a positional-audio component that makes players' voices appear relative to other players' positions, but as it accesses WoW's memory, it runs contrary to the ToU (see §2.C) and EULA (see §2.D).

TeamSpeak, or "TS", is a Voice Over IP (VoIP) gaming client. TeamSpeak's platform offers a client-server architecture where client and server software is clearly separated. This means the server product runs as a dedicated server, rather than peer-to-peer. The TeamSpeak server software is capable of handling thousands of simultaneous clients or users, which results in an Internet-based teleconferencing solution that works for a repertory of different applications such as an alternative to conference calls, cutting long distance telephone costs, or just as a method of personal communication with friends and family.

The software is released under proprietary license free of charge to non-profit entities while commercial or for-profit entities have the ability to become part of a licensing program.

Teamspeex is an unofficial 3rd party TeamSpeak client for Mac OS X which allows you to connect to TeamSpeak servers that utilize the Speex codec. TeamSpeex is sanctioned by the TeamSpeak developers. 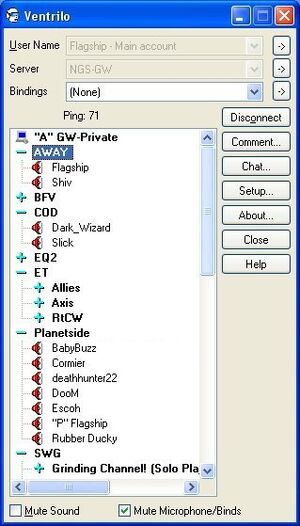 Ventrilo, or "Vent", is another Voice over IP (VoIP) software released under proprietary freeware license. It offers surround sound positioning and special sound effects on a per user, per channel, per server or global configuration level.

Ventrilo uses various codecs include Speex and GSM[1]. Generally the GSM codec, while it uses slightly higher bandwidth is the preferred due to its higher quality. Issues exist however, since all Ventrilo users on a channel must use the same codec and the GSM codec is not available for the Mac. Because of this, the server admin must create special Mac Speex channels for Mac users. Overall Mac support is poor for Ventrilo, and many screens show 'Feature Not Implemented' and they have yet to release a 64-bit version.

Ventrilo is based on a client/server model. Servers under 8 individuals can be self-hosted with Ventrilo's server software. Larger servers must be leased from various hosting companies, which in turn pay a royalty to the makers of Ventrilo.

Since many guilds use Ventrilo as an important form of communication, some guild hosting sites have taken to offering Ventrilo as an optional add-on service/module.

Ventrilo servers allow the administrator to configure various codecs with which voice data is encoded and transmitted. Current best practices are to use the GSM codec if your users are Windows-only, or the Speex codec if you will have MacOS users as well.

One problem that Ventrilo has is that it has no automatic volume normalization. While using "vent" you might notice that some people might be annoyingly soft whilst others are earbleedingly loud. To avoid this you simply have to change a few of the settings. This is not available on the Mac.

There are many possible choices. If you'd like to start small and want to speak with your friends while playing, you will most likely start with Skype. Skype however is based on a peer to peer model, which can put great strain on the user's bandwidth and CPU in larger conferences, and if the initiator of the call drops, all participants drop.

On most servers, there is one system prevailing. You need this one installed if you want to PUG. If you want to get your own server, you have a wide range of choices — again. If you are recruiting for your guild, most players would only join if you support their favorite system — or don't want to use VoIP.

Retrieved from "https://wowwiki.fandom.com/wiki/Voice_over_Internet_Protocol?oldid=2848242"
Community content is available under CC-BY-SA unless otherwise noted.