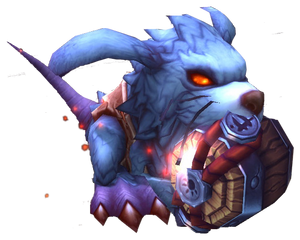 The Virmen are an annoyance with the potential to become a serious problem. Rabbit-like pests with powerful hind legs that send them bounding across terrain, Virmen typically live and scavenge out of sight in caves and burrows. But when the civilized races of Pandaria draw near their warrens, the Virmen are a famine on legs.

Virmen are inveterate lurkers, awaiting the opportunity to grab carrion, garbage, or actual food whenever they can. They'll steal and eat nearly anything, then scurry away, leaving behind overturned tables and ransacked trash piles. The menace of the Virmen is only slightly increased by their propensity to wield stolen daggers (or, failing that, sharpened pieces of bamboo) in both hands. Though most Virmen avoid direct conflict, they are not unwilling to attack others in pursuit of the sustenance that drives their every waking moment.[1]

The Virmen (formerly Verming) are a race of rabbit-like creatures native to Pandaria. Considered vermin, they terrorize the farmlands of the continent, destroying the crops of the Pandaren people. They are designed to be weak mobs, giving players the ability to fight them "in droves".[2] Together with the Hozen, they are expected to play a major role in the dungeon, Stormstout Brewery, which they have overrun.[3]

Edit to the right of the section title.
Retrieved from "https://wowwiki.fandom.com/wiki/Virmen?oldid=2714978"
Community content is available under CC-BY-SA unless otherwise noted.