Were you looking for info on the dungeon introduced with

Dalaran. It is the third instance to be located within the bounds of a capital city (after the Stormwind Stockade and Orgrimmar's Ragefire Chasm).

With Dalaran's move to the Broken Isles in

World of Warcraft: Legion, the proximity to the Tomb of Sargeras has triggered even deeper parts of the Hold to unlock. With new secrets, players will discover the origins of Dalaran and the Kirin Tor.

The dungeon is part of Legion's scalable content, meaning the dungeons do not have to be played in level-order.[1]

Among the ornate spires and enchanted streets of Dalaran, the great Violet Hold stands as a testament to the glory of the city's rulers, the Kirin Tor. Yet within its mighty walls, a dark truth awaits.[2]

Filled with row upon row of deadly inmates, the hold has long been used to restrain threats to Dalaran.[2]

During the aftermath of the Third War, Lord Garithos caught the blood elves - led by Prince Kael'thas - consorting with Lady Vashj, and forging a desperate alliance with her naga. Garithos branded him a traitor and threw him in a magical cell in the dungeons underneath the city of Dalaran. Kael found himself confined in the prison until Vashj broke him out, during their escape they put to rest the souls of four archmagi: Antonidas, Conjurus Rex, Fordred Aran and Landazar. They found a furbolg and an ogre, which were experiments of the wizards of Dalaran and let them loose upon Garithos' guards. They also fought against some trapped undead and rescued the rest of the prisoner blood elves. Finally Kael'thas and the rescued blood elves killed Jailor Kassan, an old friend of Kael'thas, who guarded the exit to escape.[3]

After Kael'thas' escape the prison was diligently watched over by the Kirin Tor and it had enjoyed stability for many years.[2]

In a sudden, violent assault, Malygos later unleashed his blue dragonflight upon Dalaran, hungry to reclaim arcane dominance over Azeroth. Utilizing a massive crack in the Violet Hold's roof, agents of the Dragon Aspect began pouring through portals within the prison, testing its integrity and risking the safety of everyone outside its walls.[2]

Overwhelmed by the audacious attack, the Kirin Tor called upon heroes of the Horde and Alliance for assistance, seeking to put a swift end to the invasion.[2] 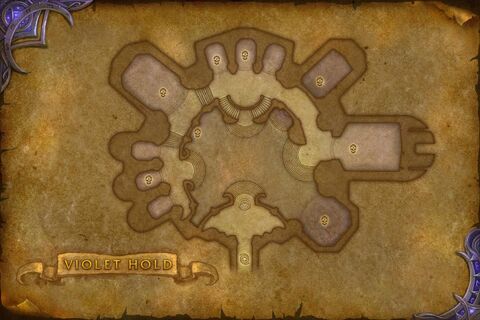 Retrieved from "https://wowwiki.fandom.com/wiki/Violet_Hold?oldid=2823926"
Community content is available under CC-BY-SA unless otherwise noted.