Tavern in the Mists

The Veiled Stair is located due west of the Jade Forest in Pandaria, linking together the Valley of the Four Winds and Kun-Lai Summit. The Stair is accessed via the Path of a Hundred Steps, the entrance located near the Grassy Cline in the northeastern region of the Valley of Four Winds.

The Path of a Hundred Steps climbs quickly into the mountains, ending at the only major settlement in the region, the Tavern in the Mists. The Tavern is the headquarters of a pandaren black market, and Wrathion can be found within, though whether he is part of the underground network or merely escaping the known world remains a mystery.

As the Stair climbs ever higher into the mountains, a fork to the left takes players to the raid, the Terrace of Endless Spring. Continuing to the (perceived) top of the Stair reveals a large cavern opening, the Ancient Passage, where a friendly pandaren ferryman will take players to Binan Village within Kun-Lai Summit. Venturing into the cave on foot will also allow willing adventurers to access the Secret Aerie via the right-hand passage, home of the People of the Sky. The Aerie itself marks the true northern point of the Stair.

Note: This is a Location section stub. You can help expand it by clicking

The Veiled Stair sits high in the mountains,[58, 50][60.5, 57.5] and much of the area is grey stone or rocky peaks topped with grass. The eastern area closest to the Valley of the Four Winds, right above the Path of a Hundred Steps, is covered with grass and sparse trees, offering food and shelter for the native goats.

The only water is also found within the Ancient Passage, flowing from Kun-Lai Summit, through the cave, and cascading over a steep waterfall.

Both Alliance and Horde players access the Veiled Stair from the Path of a Hundred Steps. The steps begin just outside the Grassy Cline in the Valley of the Four Winds, and there is a flight master at this location that offers speedy access.

Tavern in the Mists 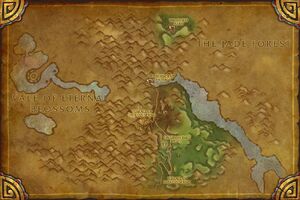 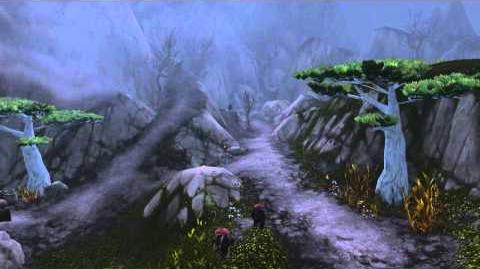 WoW Insider Mists of Pandaria Beta: The Veiled Stair by Anne Stickney Jun 25th 2012 at 9:00AM

Retrieved from "https://wowwiki.fandom.com/wiki/Veiled_Stair?oldid=2840612"
Community content is available under CC-BY-SA unless otherwise noted.