Vault of Archavon is a raid dungeon found in Wintergrasp Keep. Players may only enter the dungeon while their faction controls Wintergrasp. Notably, all bosses in this instance grant honorable kills. 10 minutes before the battle for wintergrasp starts, any boss who is not currently in combat turns to stone and cannot be fought again until after the battle is over.

Overlooking the frozen plains of the Great Dragonblight and the inhospitable wastes of Borean Tundra lies a region known to the denizens of Northrend as Wintergrasp. Seated atop a high plateau, Wintergrasp has remained undisturbed for ages, its icy winds howling unheard amongst the ancient titan fortifications that dot the landscape.

However, an abundance of elemental materials and its strategically important titan fortifications are making Wintergrasp the focus of a vicious tug-of-war between the Horde and the Alliance. And then there are the persistent rumors of an ancient titan vault beneath Wintergrasp's keep. One can only marvel at the thought of what treasures may be waiting there...

The bosses of the Vault of Archavon drop a random assortment of gear in a similar style as classic World of Warcraft before the expansions. Class specific pieces can drop for both the PvE and PvP sets. The loot can be all PvP, PvE, or a mix of the two. The loot is completely random and is not impacted by the raid makeup, so it is advantageous to bring a variety of class/spec makeups to increase the likelihood that someone can actually use the drops.

It should be noted that the PvP gear cannot be disenchanted but the PvE can. It should also be noted that should a group to wipe, depending on how long it takes to get the group reassembled some members may be flagged for PvP while others are not. This is because the watchers are all PvP flagged, having all members manually flag will prevent members from accidentally not having certain buffs when the fights start.

The "Earth, Wind, and Fire" achievement is currently the most difficult achievement for this instance. Even though it only awards 10

and has no associated title reward, this was intentional according to a Blizzard official.[1]

The instance has four

Archavon Warders in the main hall to clear before encountering

Archavon the Stone Watcher, as well as two

Tempest Warders in the east hall towards

Emalon the Storm Watcher and two

Flame Warders in the west hall towards

Things to remember with the trash 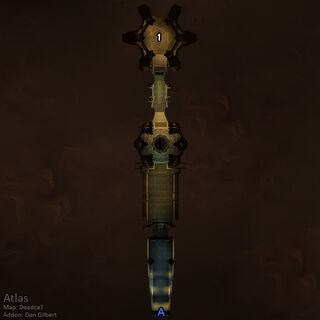 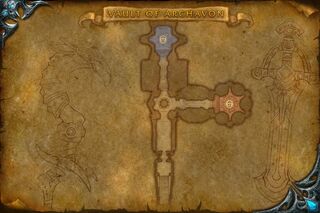 Instance map as of patch 3.1
Hall of Repose is the wing on the right side. 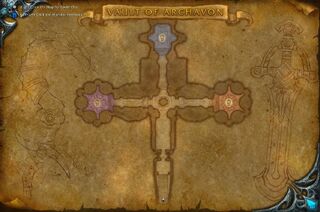 Instance map as of patch 3.2
The new wing is on the left side. 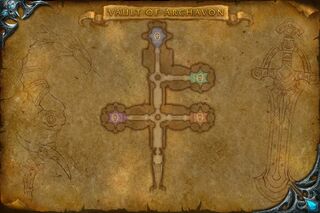 Instance map as of patch 3.3
The new wing is on the right side.
Add a image to this gallery

License To Kill VoA Minimum Gear/Stat Requirements applicable to 3.0.2 only

Retrieved from "https://wowwiki.fandom.com/wiki/Vault_of_Archavon?oldid=2823060"
Community content is available under CC-BY-SA unless otherwise noted.