Underneath the Great Sea, off the western coast of Khaz Modan
Vashj'ir (pronounced /vɒʒɪər/) was a new zone featured in World of Warcraft: Cataclysm, located to the south east of the Maelstrom, off the western coast of Dun Morogh. The city was the home of Lady Vashj before the Sundering.[1] Players are able to swim throughout the zone freely; players can also use special underwater mounts to move around the zone much faster. In the Abyssal Depths is the Abyssal Breach to the Abyssal Maw, which will contain two 5-man dungeons.

Players are called to explore the depths of the Great Sea and stop the naga from seizing immeasurable power from the realm of Neptulon the Tidehunter. The zone features an unprecedented fight for survival against the naga overwhelming the area, several new quest hubs -- including Alliance and Horde naval ships and submarines -- all-new underwater travel and combat mechanics, several pocketed undersea caves free from water's grip, a new five-player dungeon (Throne of the Tides), and the first-ever opportunity to explore the remains of the once-majestic city of Vashj'ir!

Once a great Highborne city housing some of the most revered night elves of Kalimdor, Vashj'ir was swallowed by the Great Sea in the Sundering and thought to be lost forever. Queen Azshara, formerly a beloved leader of the Highborne, escaped death in the depths of the sea when the Well of Eternity imploded. Such salvation came at a great cost, as the queen and many of her fellow Highborne were forever transformed into the monstrous naga, doomed to wander the seas for thousands of years. Their existence mostly remains a mystery to the peoples of modern Azeroth, though the Earthen Ring has learned of Azshara's naga seizing Vashj'ir for an unknown purpose as the cries of the elements echo across Azeroth from the Abyss.[2]

Need your help. Time is short. I'm held captive in what I hope to be a nightmare.

Enjoying the ocean air just days ago. We were determined to control key trade routes through victory at sea over the Horde. Their fleet came into our scopes. Our world became the deafening sound of battle, the smell of gunpowder, and the feeling of fear. Looking back now, though, that wasn't real fear.

We weren't alone in those waters. Our naval warfare attracted attention and rendered us prey. With our vessel already torn apart and taking on water, we saw a tremendous creature rise from the depths and shatter the hull, sucking us down to the sea floor. It all happened so fast. I was quick to tread the waters, hoping to regroup with any survivors I could find through a dense garden of kelp, constantly gasping for a chance breath. That's when the onslaught began. From all directions swarms of brutal naga swept through and captured a great many of us. Beaten near to death, I awoke in agony, bound in chains.

And here I still sit. I can only describe our prison as very big and somehow very much alive. We're in the hands of the naga now. Surviving crewmates in better condition than me are driven into slave labor.

One escaped. Thomas. He didn't make it far before I saw him dragged back. Before being forced into labor, he spoke in a panic about some large shell protecting this living prison, expansive night elf ruins in the distance, strange naga rituals underway, and sea vrykul battling our captors. He made little sense. Could be mad. Or I could be mad to hope vrykul are fighting to free us.

Vashj'ir is a recently discovered piece of land mass, which has been lost to the depths of the Great Sea for thousands of years. However with Deathwing's return, and with him, the Cataclysm, a massive earthquake which resulted in the partial destruction of Booty Bay and several other shoreline locations (Auberdine, all of Stranglethorn Vale, and Durotar) caused a piece of the sea bed to raise exponentially, allowing for access to a location in Azeroth that hasn't been visited by non-Nagas for thousands of years. It is possibly a part of the ancient Night Elf capital, Zin-Azshari. As soon as the location was discovered to be accessible, both the Horde and the Alliance rushed ahead to gain control of this new land mass. Mostly for defensive reasons for the Alliance, and offensive for the Horde. If the Horde gains full control of Vashj'ir, the Horde will gain a direct attack base against the Alliance, considering that there's only a short, fly-able distance between it and Ironforge or Stormwind City.

The landscape of Vashj'ir differs greatly the further into the zone one presses. First there are well-lit depths coupled with waving strands of seaweed and kelp and sandy beaches. This gives way to the first of many naga ruins, the zone becoming more choked with strewn columns and shattered buildings as adventurers plunge deeper into the depths. There are many caves, most of which contain air pockets that intrepid explorers of both factions have utilized to their advantage. Deep trenches are frigid and dark, and some even contain monsters beyond belief.

Both Alliance and Horde players are given an introductory quest (Alliance / Horde) to the zone that will transport them there aboard a ship. Once the introductory quests are complete, they may then use portals located within Stormwind City and Orgrimmar to return. You can get there other ways, but you will miss the intro/story lore. There are also flight paths available. It is possible to fly straight from Stormwind City to Vashj'ir with a 280% flight speed mount, making it an ideal choice for a PvP raid group to originate from. You can also fly easily from Ironforge with even less Fatigue loss, but since you have to travel over half of Dun Morogh, it isn't a great way start a PvP raid undetected. Reportedly, a land mount run across the fatigue zone is possible, using a water walking potion and leaving from the closest point off the Dun Morogh coast.[citation needed] It's even possible for a Level 18 Druid to swim there using Wild Charge and Swim Speed Potions from the closest point off the Dun Morogh coast.

Swimming in Vashj'ir works as it does in lakes and oceans anywhere else in World of Warcraft—using the WASD keys to move on the X and Z axis, and then pressing the jump button to ascend and the X button to descend on the Y axis. One can also get around underwater by clicking and holding both mouse buttons and rotating the camera to point where they wish to go. Once a player has made contact with the sea floor they will begin to run across it much like standard terrestrial locomotion. The quest Sea Legs will gift you with permanent underwater breathing and faster sea-floor movement while in Vashj'ir. A swimming seahorse mount can be obtained from the quest The Abyssal Ride. (Note that you must first complete the introductory quest chain for the quest-giver to phase in.)

Though there are no fishing pools, you can fish in Vashj'ir; 575 fishing is required to fish without catching junk.

Players are tasked with a variety of jobs. Initial quests focus on survival, as both the Alliance and Horde have been taken unawares by the marauding naga. Players will begin by meeting simple requests, such as gathering stolen or lost supplies and replenishing stores. Further into the zone will begin the fight with the naga, which will culminate over several long and phased quest lines. Several giant, powerful creatures have also been enslaved to serve the Twilight's Hammer clan, and players will undermine their plans by setting these creatures free and exacting revenge.

Map of Vashj'ir
Add a image to this gallery 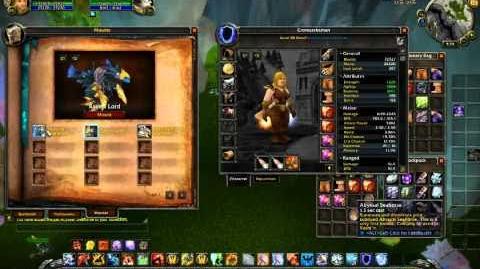 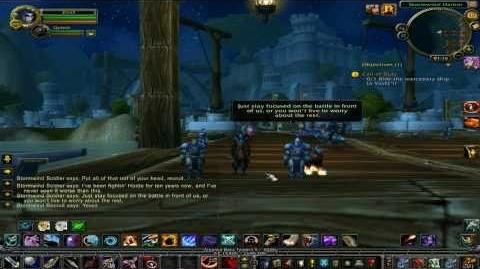 Retrieved from "https://wowwiki.fandom.com/wiki/Vashj%27ir?oldid=2862661"
Community content is available under CC-BY-SA unless otherwise noted.