Start a Wiki
The Valley of Wisdom [42, 39] was the seat of the orcish warchief, Thrall. He resided in Grommash Hold along with the Orgrimmar shaman and paladin trainers. The valley was also home to a few vendors and quest givers, and was also home to the remains of the pit lord Mannoroth.

Excludes the above areas.

Near the auction house 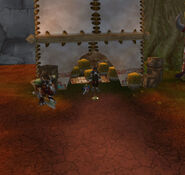 Tatepi at her unmarked bank
Add a image to this gallery

Retrieved from "https://wowwiki.fandom.com/wiki/Valley_of_Wisdom?oldid=2839237"
Community content is available under CC-BY-SA unless otherwise noted.