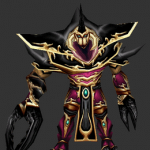 If you are going to copy something nearly word-for-word from WoWpedia, please give credit to them.

Hey Assey, you sure there are forsaken in Stromgarde? Seems unlikely considering that they are members of the opposing faction.

If you're going to copy icons from Wowpedia, please credit them with the {{Wowpedia credit}} template.

Hey Assey Westfall, first of all, hi, I've never really spoken to you on WoWWiki

Second of all, I really like those images you added of the Aspects and their Consorts, where abouts are they from?

It looks like your recent images are from an artist on DeviantArt. If you used them with permission, that's great; however, if you didn't, we need to ask before we put them on our pages. In either case, they also need to be properly attributed - preferably in both the "About" section of the file's page (for instance, File:Zin_Azshari_Guards.jpg, the "About" header) and also in the thumbnail description when they're used, linking to the original artist's page. Raylan13 (talk) 15:14, June 9, 2013 (UTC)

Fandyllic already told you a while back to not copy icons from wowpedia without proper attribution. Please go back through the icons you've uploaded and attribute their source properly with the Template:Wowpedia credit template. Keep in mind I'll be overwriting those as I go along.

Consider this your final warning. Any more subsequent uploading without attribution will result in a ban. Raylan13 (talk) 22:17, July 12, 2013 (UTC)

But remove all those icons then -.-

Hey Assey! I just wanted ot let you know that the recent fan art images you have provided for wowwiki of Thrall and other people about the different appreances and ages is that I have uploaded them over at wowpedia and displayed them on the appropiate articles. You can see an example of how these images are: here. If you want these removed, just message me and I'll contact/notify an administrator asap to remove the images.

Here's some stuff you may need to check out for these images by the way ;).

Its very good to let him know and ask.

Normal convention is to put {{WoWWiki credit}} at wowpedia for content from here, and {{Wowpedia credit}} on any content, including images and files, like farther up on this talk page.

The reason is to attribute the author and history when copying, which is a basic tenant of the whole public wiki thing. You can place those on the Image description on the image page, and probably on the content page itself. This makes it so that one can see the others edit history which documents the authors contribution. Otherwise you need to leave enough information on the Page or File, proper, to satisfy the CC-BY-SA which would be tedious at best. See Forum:Copying_stuff_from_Wowpedia for our version. Regardless its your burden to fulfill, not his to respond. Celess (talk) 22:33, January 1, 2014 (UTC)

Yea I thought so, the license will be added just to be sure. The wowwiki credit template, I'm not really sure because the name of the file is different from wowpedia. Instead of the numbers, its "history" instead under the jpg format. Otherwise, Thanks Celess! ~~Zark~~ 23:44, January 1, 2014 (UTC)
Nevermind about the template, I found out a way. ;D ~~Zark~~ 23:57, January 1, 2014 (UTC)

Yes indeed, I have used that template before. I was just not sure how I was gonna make it come to a different name until I checked the template and read about it. I found my way around, thanks anyway! ;) ~~Zark~~ 02:14, January 3, 2014 (UTC)

See File_talk:Garrosh_Hellscream_0.9.1.png. I agree with the anon. I'm assuming you just left the baby green because it was easiest. --

I didn't quite understand what you said on my talk page. What is the problem you see with WoWWiki:List of creature icons? --

I've noticed you have been adding affiliations to several of the character pages lately (nice work keeping them up-to-date for WoD!). However, in the process (whether intentionally or not) you have been applying some irregular indent (:) and blank-line formatting to some of the info boxes. It is non-standard text formatting compared to all of the other character pages on this wiki, and IMO it doesn't really seem to match with the format of the rest of the sections in a character info box. I'm just curious if this formatting is intentional and if so, what your reasoning is behind it.
- Sitb (talk) 19:11, October 17, 2014 (UTC)

Hello again
I saw the message you left when you updated Alleria Windrunner's page regarding the indentations demonstrating sub-factions. I think it's a good idea, but might I suggest using nested bullets in addition to the indentation. Bullets could help sort the information a bit cleaner. In it's current form, the spacing doesn't look deliberate at a glance and appears as though the formatting could have been made in error. If you're not sure what I mean, take a look at the table of contents box for any given page, but instead of each item in the list having a number, it would have a little bullet symbol in front of it (or an appropriate inline image). Anyway it's just an idea. I'm not sure if this type of stuff needs to be run by the administrators before you make formatting changes like that, perhaps one of them could offer some input. :)
- Sitb (talk) 17:01, October 19, 2014 (UTC)

The preference for formatting is that it follow standard formatting and be presented as cleanly as possible.

I've been playing around, testing this type of indentation in the npcbox since I posted last, and the "bullet" idea I offered above (*) does seem to make the point a bit clearer visually that the indentation is meant to show sub-faction.

However, be aware that npcboxes are coded in a way that they have a standard width set. As a result, words will wrap down to the next line when they reach the right edge of the box. Each time you indent a line, you have less space to fit the faction name in, and with enough indents (pretty much anything beyond two indents (::) ) you can only fit a single word per line. It will end up looking something like this:

At one word per line, I would hazard a guess that we can't really consider the formatting to be "clean". Also, following Raylan13's advice above regarding "standard formatting", would require hundreds of character pages on this wiki to be updated with this new formatting method.
- Sitb (talk) 17:28, October 20, 2014 (UTC)

Says that you aren't blocked. The IP you used to leave the message isn't blocked here either. What message are you getting? Celess (talk) 21:39, November 23, 2014 (UTC)

Are you going to make this a real page at some point. It would be very cool. You could keep your sub page around for your version/future updates. We would probably also semi-protect the page so anons and new users can't screw it up. --

That page (with now go by the name User:Assey Westfall/Warcraft Serie) was bugged up some time ago and I am working on fixing it. After that is done however I would be happy to make it a real page with (semi)protection. This will however take some time so I let you know when it is fixed :) Assey Westfall (talk) 19:02, February 15, 2016 (UTC)

Retrieved from "https://wowwiki.fandom.com/wiki/User_talk:Assey_Westfall?oldid=2857077"
Community content is available under CC-BY-SA unless otherwise noted.