Chen's discovery at Stormstout Brewery might have broken any normal pandaren, but Chen resolves to prove himself to not only Uncle Gao but the entire valley community. How? By doing what any self-respecting Stormstout would do: brew the perfect beer!

To do this, Chen needs supplies, and the best place to get them is at Halfhill and the market. Just like the other areas we've encountered in the Valley, Halfhill is experiencing its own problems. If his perfect brew is to ever see the light of day, Chen, Li Li, and Mudmug must take separate paths for a short while, each pursuing a different but necessary component for the brewing process. Chen starts by gathering the barrels needed, but then sends us in search of hops to the Heartland.

The Heartland serves as the agricultural center for Pandaria, and it makes sense that the farmers here would have some hops to spare. But it doesn't come without a price. Each has tasks they would have us complete before handing over their valuable hops. We slog through the labors, watering crops at a breakneck pace, fighting (more) virmen, and fighting back various waves of weeds. 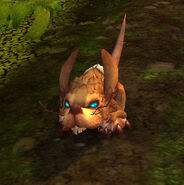 Along the way back to town we spot Mudmug standing at the edge of the marsh. Seems he's there to hunt down some water for Chen, so we dive right in and assist. There are a few surprises we have to deal with while scooping water, but soon we have enough and Mudmug carries them back to Halfhill with us (he's pretty strong!).

One of several unpleasant surprises.

All that's left to do is find Li Li at the Imperial Granary. It's a short walk from town, and when we get there it's no big surprise this isn't going to be an easy request to fulfill for grain. For starters, we have to taste each kind to figure out which is the best... and Li Li is disappointed to find that none of them will quite work out. So she sends us over the cliffs and into the Krasarang Wilds on a wee little foray to get some well-guarded cave barley. On the way we help recover some stolen grain, thin out the pesky sprites, and depose their leader.

With his newly completed brew, Chen is ready to return to Stormstout Brewery. There's a just one, small catch: when we get there, the entire area is overrun with virmen and drunken hozen! In clearing the way, we encounter an exceptionally large hozen who has trapped the pandaren in barrels and also gather some "special" water for Mudmug. Can't let a good mob go to waste! 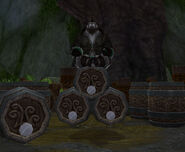 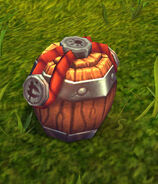 Pandaren in a barrel.

With the exterior clear, Chen turns his attention to the Brewery itself. He, Mudmug, and Li Li help us attack the major denizens one at a time, and soon things are right again, at least for the time being. But Chen knows something deeper and darker lurks in the Brewery, something that will have to be confronted if he is to reclaim his birthright.

For now, he is content with our progress. Not a moment too soon, an emissary arrives from the western town of Stoneplow, seeking refreshment for the troops. She also carries with her news of another threat...

Retrieved from "https://wowwiki.fandom.com/wiki/User_blog:Raylan13/Valley_of_the_Four_Winds_Part_III?oldid=2569342"
Community content is available under CC-BY-SA unless otherwise noted.