Now that we've fought off the virmen and rescued the herd animals, we follow Chen Stormstout from Shang's Stead. Li Li, his niece, is ready to go as always, eager to explore the whole of Pandaria as quickly as she can. She's more than a little annoyed with Chen's steady, slow pace, but he's quite comfortable taking his time... for now.

Halfway down the hill our little trio chances upon a lone pandaren gazing across the fields. Compared to the pandaren we've met thus far, he has a distinctly... southern... drawl to him. He is none other than Mudmug, a local brewer who uses muddy water for his beer. But his ability to brew has been hampered by the virmen. With beer threatened, Chen is quick to offer aid, or at least our aid. 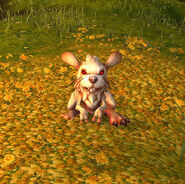 Li Li has some great ideas for confusing the virmen, but Chen is more of a "to the source" kind of person. First he wants to take out the alphas, then the warren-mother herself!

All that's left before sampling Mudmug's concoction is to retrieve some stolen hops. Settling down after a long and grueling fight with the virmen, Chen, Li Li, and Mudmug share the home brew with us, and Mudmug lets slip there's this place called "Stormstout Brewery". Chen is interested at once, and suddenly a sense of urgency overcomes him. He departs for his family's brewery, leaving Li Li to her own devices.

So the first thing she wants to do, naturally, is some exploring. We tag along in order to keep her safe.

Along the way we meet some new folks who are eager for our help. The workers at the Silken Fields are beset by mutated creatures of their own making, and we need to thin their numbers and take down the mutant mother moth. While we're there, we also get a short lesson in where silk comes from.

New Cifera and the bordering Pools of Purity offer a sense of tranquility but they, too, have problems of their own (at least it isn't virmen!). Between a disgruntled wife and fisherman and encroaching turtles, we've got some work cut out for us. Yet there's some time to help a local chef make some jam from fish eggs (yum!) and we meet up with Clever Ashyo, one of the companions of Xiao that went in search of the Hidden Master. While he may not have found the old fighter, he does have a vision that alludes to the mythical Vale of Eternal Blossoms.

Mothran, mother of the mutated

A giant, sleeping turtle
Add a image to this gallery

Just in time, we return Li Li to Mudmug's Place, just as Chen arrives from having visited the Brewery. For a pandaren, he seems especially despondent, and it soon becomes apparent why. He tells a story so captivating that we can see through his eyes as he steps inside his family's brewery, only to be ignored by a surly pandaren. The old chap doesn't so much as return Chen's greeting, and seems more than eager to kick him out. Chen also finds some rather unsettling inhabitants in the brewery, including an alemental and a drunken hozen. Shunned and crushed, Chen departs the Brewery, though he is adamant he will return to discover what has happened.

Retrieved from "https://wowwiki.fandom.com/wiki/User_blog:Raylan13/Valley_of_the_Four_Winds_Part_II?oldid=2568812"
Community content is available under CC-BY-SA unless otherwise noted.