Chen Stormstout, Li Li, and Mudmug are content with staying at Stormstout Brewery now that we helped clear out a bit of the riffraff and secured Thirsty Alley. As we mentioned before, it seems we're just in time in returning things to normal, for an emissary has come all the way from Stoneplow for some emergency beer rations. We don't quite have a clue what we might be facing as we head down the western road, but as we make our way further from the Alley and Brewery, the surroundings become a bit more wild. Mushan graze in giant packs off to the south, while wolves prowl the grasses and trees to the north. 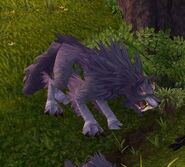 Wolves on the prowl

Stoneplow seems relatively peaceful, but there's a noticeable lack of farmhands in what is supposed to be a farming community. Looking further west we begin to see why: the fields are blackened closest to the Great Wall, with smoky white tendrils writhing from the ground. This can only mean one thing: the sha have somehow corrupted the area. The mantid in league with them are flying over the wall from the Dread Wastes, and it is only the bravery of a few Shado-Pan that hold them back.

Commander Loon Mai is in charge of the defensive forces, and also oversees the evacuation of his fellow pandaren. With his troops stretched so thin he cannot gather all the people himself, and so we volunteer for the task. While gathering our wits, we also meet with a familiar face, Lin Tenderpaw. She has stopped her on her way to find the Hidden Master. Though young, she can see just as well as any that the monks cannot hold back the mantid forever, and so suggests we do our part to thin their ranks. It only makes sense, as we'll be in the fields anyway.

Not at the pandaren are receptive to the evacuation order. A few families adamantly refuse to surrender their lands to the invaders, especially since they've tilled them for generations. Loon Mai doesn't seem too surprised by this; he'll keep his monks fighting for as long as he can. In the meantime, it seems he knows about the "Hidden Master" that Lin and her friends are searching for. He points us in the direction of Paoquan Hollow, a creepy forest not too far to the north. Lin can't even wait for us, so full of excitement, and she sprints off with little more than a "hope to see you there".

Paoquan Hollow is filled with mist. It's an eerie place, so unlike the rest of the Valley we've already seen. Fireflies dance in the gloom, while massive shapes appear and disappear. There's but a central path that leads through the dense fog, little used, and it stops at a small hut that suddenly looms before us. There's Lin, already trying to continue her training with the Hidden Master.

Master Bruised Paw instantly puts us through some rigorous training. We smash through bamboo, wood, and stone; we light fires in the mist and take on the shambling dangers head-on; we even climb high in the hills to gather a variety of eggs from the woodland birds, all to have the Master use them as part of our training! When all is said and done, we are tired but proud, having worked through the worst he had to throw at us... and poor Lin is left still attempting to learn just the beginning basics as we say our farewells to the strange old pandaren.

The various trials, ready to chop!

The horrors in the fog

Where to gather eggs

Thus ends our journey through the Valley of the Four Winds. Loon Mai thanks us for our help when we return to Stoneplow, and we are left to our own devices. We hear there may be a famous hunter in the south, his camp perched high atop the cliffs bordering the Krasarang Wilds. Yes, there he is, with some new faces and his son. Ready to send us off hunting wild game, hunting bigger game...

Go back to Valley of the Four Winds Part III

Retrieved from "https://wowwiki.fandom.com/wiki/User_blog:Raylan13/Valley_of_the_Four_Winds_Finale?oldid=2569343"
Community content is available under CC-BY-SA unless otherwise noted.