As we continue on from the Temple of Five Dawns in our ongoing quest to find the ancient spirits, we head east and down a very steep hill into the Singing Pools. Even before we head to the valley floor, we can see that this is a very different landscape from our beginning foray into the Dawning Valley: the land is lush and vibrant, pools pocket the ground, and we can see pandaren honing their balancing and fighting skills atop balance poles sunk into the water. These are Tushui Monks, and where there's Tushui, we know Aysa Cloudsinger can't be far behind.

The Singing Pools
Add a image to this gallery

Our first stop is at a little house at the bottom of the path, where we see Jojo Ironbrow meditating, surrounded by a curious group of onlookers. He'd like us to gather some reeds for him from the nearby pond, and we do so (there's a catch we'll later mention...). He then proceeds to stack our reeds, then snap them like a twig to demonstrate just how much meditation will do for you.

Aysa isn't too far away from him, meditating herself within another pool. Before we get into her tasks, now we can mention that there's a few of the pools that seem to have a bit of magic imbued in them. Aysa's is one, the "skunk pool", which turns us into a skunk as soon as our furry toes touch the water. That doesn't really hinder us (though it gives us a nice aroma), and it's really the other pools we have to worry about. The "turtle" and "frog" ones. See, if we're turned into one of those critters in those pools, the cranes suddenly decide we look like lunch. And who can blame them? Frog legs are good. Luckily for us, there's a few signs posted:

The frog pool.
Add a image to this gallery

That last one? Oh, yeah. That's where Jojo wanted us to gather our reeds from. Funny, he didn't mention we'd be turned into frogs. Aysa also wants us to traipse on over here to match wits against the balancing monks and leap from pole to pole to ring the bell in the center.

All in all, though, the tasks aren't so difficult, and soon we get down to the nitty gritty: finding Shu, the ancient spirit of water. Aysa sends us to Old Man Liang, the only pandaren known to have spoken with Shu, and so we track him down at his retreat:

The path into the hills.

Very nice interior.
Add a image to this gallery

Liang tells us a short tale of how he and Shu used to play and be friends when he was much younger. Age has gotten the better of him now, and so he's had to leave his elemental buddy behind, and most of his jobs, too. But he remembers what Shu likes, and what he [used to give him as a gift], and so he sends us to retrieve it while making the pools a little safer. The Water Pincers are a bit odd looking, we have to admit.

Before long, we have Shu's gift and bound up some rocks (via magical water rings) to reach the Pool of Reflection. Shu isn't anywhere to be found, skulking invisibly about. All he wants is a friend, though, and so we drop his present in the middle of the pool and wait. It doesn't take long for him to show his blue little face, and Aysa suggests we play with him.

Of course she does. After all, she isn't the one that has to stand in a pool of frothing water and then get launched fifty feet into the air. Repeatedly.

The Pool of Reflection 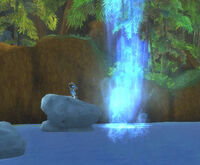 Shu having a little fun. 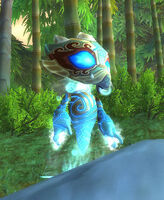 Shu!
Add a image to this gallery

Oh, who are we kidding? It was pretty fun, and now Shu plans on following us around for a bit. Now Aysa decides to mention that another spirit can be found. All we need to do is take a little trip to see Ji Firepaw...

Retrieved from "https://wowwiki.fandom.com/wiki/User_blog:Raylan13/Beta_testing:_Singing_Pools?oldid=2552414"
Community content is available under CC-BY-SA unless otherwise noted.