Now that we've managed to survive the crash of the Sky Shark, recover a few supplies, and rescue a few of our crew mates, it's time to bid adieu to the Wreck of the Sky Shark (or what's left after we detonated the wreckage) and make our way to the small encampment that General Nazgrim has managed to secure.

Hellscream's Hope is a bit of a jog to the south, and we dodge plenty of hozen in order to make it there. It's a very simple camp, and all that seems to really make it Horde is a single stone tower. Piles of hozen scavengers ring the perimeter, Nazgrim and his troops having slaughtered them in claiming the area.

We come upon all the crew members we helped find earlier. Our situation here is slightly better now, but there's still more hozen to deal with! Yep, it seems we crashed into one of the most populated sections of the Jade Forest, and the area around Hellscream's Hope is crawling with them. Plus, there seems to be one rather loud-mouthed hozen yelling insults at Nazgrim, which really detracts from his ability to focus on our survival. Nazgrim does what comes naturally to any hot-blooded orc: he tells us what a great job we've done, then sends us right back out to wipe a few more hozen off the map.

Rivett is a little more pragmatic. We're sent out near Serenity Falls to gather yet more supplies from the thieving hozen. Kiryn, though, is the most resourceful of the lot. The hozen are annoying? Fine. Let's get some poison from the local flora, spray the hozen from the air, and then deal with their loud-mouthed leader.

More on that in a second. First, some nice shots of the surrounding area:

The Fertile Copse is crawling with hozen 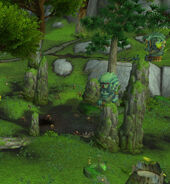 Hozen camps sprinkled throughout
Add a image to this gallery

Kiryn's quests are pretty straight forward, but flying around on a drone is more akin to a goblin idea than one suggested by one of the Forsaken. The task is pretty simple once we have her poison in hand: tether ourselves to a goblin drone, then get hauled overhead through the Fertile Copse, dropping her poison-tipped stars on them. The quest was pretty fun, as you could single-target or use an AoE ability once you were over one of their camps.

Once we dropped some acid on them and they got a really good look at our faces, Kiryn decides it's a great idea to send us after their leader. You know, sending us running through the very same area we just carpet-bombed, surrounded by extremely angry hozen. Those Forsaken are quite cheeky. 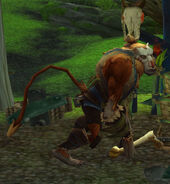 Happy to meet us!
Add a image to this gallery

With Yoggtord dealt with, hopefully Nazgrim can work in relative peace. We pick up the sacred scroll that just happens to be sitting in Yoggtord's camp. Just up the path begins the next leg of our adventure... where there sits a cave... and the Horde's first interaction with the pandaren people...

Retrieved from "https://wowwiki.fandom.com/wiki/User_blog:Raylan13/Beta_testing:_Hellscream%27s_Hope_(Horde)?oldid=2558677"
Community content is available under CC-BY-SA unless otherwise noted.