What this page is about

This is just a collection of theories i have about certain aspects of Warcraft lore, mostly stemming from my tendency to play devil's advocate.

Please browse, feel free to add any questions or ask for more info and citation where you feel it's needed and i'll try my best to sort them out.

Breaking down the walls of Azj'Aqir

I've noticed it has become widely believed that C'Thun created the Aqir from the Silithid, who then later became the Qiraji and the Nerubians. This has gotten to the point that this very Wiki has this written as fact, and changed certain parts away from what is written in the lore. However it is never explicitly said anywhere in the lore, and there are certain parts of the lore that make it impossible to be so. It is the most obvious conclusion to draw from only reading a few bits of information i agree, but i aim to force people to look deeper into the lore and see why it is not the only conclusion, and probably not the most likely one either. 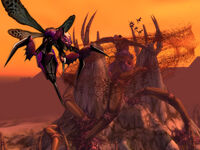 The Aqir are said to be intelligent, but the Silithid aren't.
There is a complete misconception of the level of intelligence. There is no mention of structures or a great fortress like that of Azjol'Nerub or Ahn'Qiraj. Only that the Azj'Aqir civilization was underground. No where does it say the Aqir(Silithid) were at the level of intelligence or civilization that rivals the Qiraji.
The Prophecy of C'Thun is written by the Prophet Skeram, a Qiraji. It is biased and so can't be trusted.
All Warcraft lore, regardless of who wrote it, is fact, and not considered to be written with a bias. Only lore where things are pointed at as being uncertain, speculated, rumoured or mythological by characters (e.g. much about the Titans and Troll/Elf_Lineage) are to be taken as not fact. However, even then, in most of those cases, as is often later discovered, Blizzard will purposely leave them vague, because despite them being true, they wish to leave fans guessing and elaborate in depth at a later time. It adds much to the story and the resulting feel of the Warcraft universe.
Skeram's accounts have to be taken as fact, as there are no other sources except perhaps the Nerubians that can explain the history of the Qiraji. The Night Elves and Dragons only learnt of C'Thun right before the sealing and is not even spoken of in their account of events. He is a chosen conduit to tell the story of the events for Blizzard, as only the Qiraji can.
And even then, my theory doesn't solely rest on it, and it would only open up more questions as to what the truth is.
The Aqir are said to have slowly evolved into the Qiraji in Silithus, it couldn't have been C'Thun.
Slow evolution doesn’t necessarily rule out evolution through C'Thun's intervention or that the process for a single Aqir(Silithid) was a slow one. It could just mean the process for the entire Aqir(Silithid) population. It is also never said to be natural evolution.

Where is he now?

I was surprised more people hadn't questioned this topic. When i bring it up, people assume Sargeras is still around and still running the show despite all the evidence pointing that he has gone and hasn't been in charge of the Burning Legion for a while now. Hopefully i can shed light on this topic and show people what i beleive became of him.