Gruag is an orchish Shaman, especially gifted with the element of water and the ability to heal. He was born four years before the First War and is currently 29 years of age according to the timeline. He’s a relative of the old Frostwolf Clan, though he prefers to keep all of his past ties secret and merely honors his ancestors. He was one of the thousands who drank the power of the Burning Legion and his red eyes are a harsh reminder of the past.

He is bonded to a giant dire worg named Murktooth and has also befriended a dark whelpling. He is a member of the New Horde and a strong supporter of Thrall.

Gruag was born during the Shadow Council’s rise and corruption of the Old Horde. Though his bloodline was all but forgotten and memory of his infancy a blur, the future would later reveal that his ancestors trace back to that of the Frostwolves.

He became an orphan soon after the First War began, his parents assumed to be assassinated for association with the Frostwolf Clan after Durotan was turned to exile. Without family, Gruag was swept into what would now constitute as the Orgrimmar Orphanage, though at the time it was indoctrinating the young into formidable warriors. Still in his childhood during the First Invasion, Gruag’s role was minor as he took on hard labour tasks under the command of Blackhand.

At the end of the Second War and now at the age of 22, Gruag was subjected to one of Aedelas Blackmoore’s internment camps. Like most of the orcs prior to their freedom, Gruag had fallen into the warrior’s legathary without the frenzy of the Burning Legion’s bloodlust and damned the orcish Horde for such weakness. However, it was Warchief Thrall’s passion and pride that stirred Gruag’s blood, like so many others, rekindling his hope for a new life for his fellow kin. 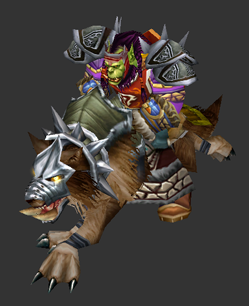 After the liberation of the internment camps, the former warrior sought the ways of his forefathers and began the path of Shamanism. After the displays of courage and will seen by both Thrall and Drek’Thar, Gruag sought apprenticeship in elemental combat before and during the Third War. This new training brought the young orc to grow in ways he could have never imagined possible under the influence of the Burning Legion, discovering his blood ties to the Frostwolf Clan as well as inner power only shamans could appreciate.

Gruag fought for the Horde during the Scourge Uprising as an elemental wielder for the first time instead of a frenzied grunt, pledging his full loyalty to Thrall after Azeroth’s victory.

Leading up to the Battle of Mount Hyjal, Gruag befriended a hulking worg with muddy brown fur, whom later was named Murktooth. It was during a scouting mission that he came across the animal ensnared in what appeared to be Night Elf traps and proceeded to free him. The worg has been following Gruag since that day and has since allowed the orc to ride on him as the raiders once did.

He mastered his Shaman Training after the end of the Third War and now spends his days roaming both Kalimdor and Azeroth, fighting in the name of the Horde, and furthering the pursuit to secure Orcish independence. He also discovered the whereabouts of two of his siblings: Akei, his older brother who has also become a master shaman, and their younger sister Drigka, an aspiring warrior.

The once hard, secluded Gruag is both well spoken and well mannered. He knows little Common, but can formulate intelligent speech in Orcish as well as the most educated of his kin. Though he is fairly carefree in his current lifestyle, a situation where protection must be provided is enough to stir the frenzy of his past. He is fiercely loyal to both Thrall and the Horde and willingly places his life on the line to stand up for his beliefs.

As a shaman, he holds a strong tie with the nature and the spirits, preserving life at all costs. Peaceful action always comes before hostility, though he is unmerciful to those who pose a prominent threat. While the safety of life and the natural world comes before all else, Gruag does have a tinker side, tracing back to his days assisting the old Horde’s Goblin Sappers with explosives, and has now turned into a hobby when he is in his home of Orgrimmar.

Gruag was one of the first deployed to the Outland as of the recent opening of the ancient Portal. With the scars of the Old Horde lingering, Gruag is adamant to serve in putting an end to the oppression of the Burning Legion once and for all.

Gruag's work with the Horde legion occupying Hellfire Peninsula, those of Thrallmar, are worth noting. Under supervision of Nazgrel and the other officers operating the outpost, he has both assisted in culling the fel orc presence and gathered valuable research regarding the fall of the Old Horde clans.

Gruag has seen his former aquaintences from the glory days of the old Horde, such as Tagar Spinebreaker and the offspring of Killrogg Deadeye. Pained at the sight of them now twisted and more corrupt than ever before, he has made great effort to assist the Outland apothecaries in discovering the source and a potential cure for his former brethren.

Inspite of the corruption of the old clans, like most of his people Gruag is more than overwhelmed from learning of the only survivors of corruption: the Mag'har. Having assisted with their small deployment in Hellfire Peninsula, Gruag eagerly continues to seek out and prove himself to the greater culture of the brown-skinned warriors.

Retrieved from "https://wowwiki.fandom.com/wiki/User:Weremagnus/Gruag?oldid=604253"
Community content is available under CC-BY-SA unless otherwise noted.