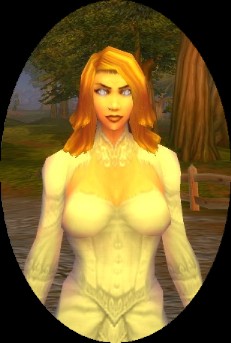 Physical Description: Normal size for a human woman. Her hair was honey red and layered. Her eyes were once brown, but due to a warlock's mind invasion, they were scarred over and looked more milky white than brown. Her arms and ankles were usually covered in ink - notes she had written to herself. Usually in the company of her 'kitten' - a prairie chicken - but in her mind it was a siamese.

Personality Description: Amiable, but very untrusting of all warlocks. Also, she had an extreme fear of chickens.

Catrionae grew up in Redridge. Her parents simple farmers. Knowing their daughter had a penchant for frost and fire, she was sent to Stormwind to learn to be a mage. Shortly after her schooling began, she was kidnapped by Wanderspirit at the Darkmoon Faire and her mind tormented and invaded by a forsaken warlock. The Trouble with Humans.

Griffonclaw saved her from her death and the two of them began a relationship that was one sided. Soon, a mage from the Knights of the WAY heard of her and asked permission to take her under his wing and teach her ways to better tame the arcane. The story of their relationship can be found on the Remnant wiki. The Cat and Digory Saga

Catrionae was ultimately sacrificed on the Altar of Storms by the Scions of Darkness and Obsidian Order. She was taken during her wedding, forced to enter a portal at knifepoint by the rogue Nezera.

Her soul was 'caught' by the Trader Bamboozle and made into a pendant for Digory to wear. Her spirit walked with him for a time, but she soon became forlorn as life moved on and she was unable to affect change. She did visit Griffonclaw on the night of his wedding - a final goodbye.

A deal was made with the Trader to end her walk. Griffonclaw's soul was mended at the cost of hers, The Trade Complete.

Her body was buried in Redridge. The footage of her funeral can be found by watching Hallowed Ground

Cat's soul with the Trader and Digory - By Zamboozle

Retrieved from "https://wowwiki.fandom.com/wiki/User:Wanderspirit/Catrionae_Galagher?oldid=2050550"
Community content is available under CC-BY-SA unless otherwise noted.