Lord Jaraxxus is an Eredar lord who served the Burning Legion and later becoming a Paladin of the Silver Hand.

He is the second encounter of the Trial of the Crusader raid instance, released in Patch 3.2. Lord Jaraxxus is summoned by Grand Warlock Wilfred Fizzlebang when the gnome attempts to summon a doomguard for the next challenge. Jaraxxus kills Fizzlebang for his efforts.

When the Burning Legion had began to invade the world of Azeroth the third time, Jaraxxus is one of the many demons that were summoned by an alternated-version of Gul'dan, who came from an alternate timeline after the War in Draenor and given a chance by Kil'jaeden to aid the Legion in conquering the entire planet. He was seen with a number of demons that were summoned in front of the Tomb of Sargeras and prepared to attack the forces of Azeroth in a huge battle at the Broken Shore.

In the World of Warcraft: Invaders of Zandalar, Jaraxxus had been captured by the Alliance and a held a prisoner since the Legion's failure to conquer Azeroth. During the war against the Zandalari Empire, Jaraxxus was imprisoned inside the Exodar where he was visited by Velen and the High Priest of the Conclave. Jaraxxus began to wonder if the Light had not forsaken Velen and the Draenei and how they were strong enough to face against the Shadow. Velen told him that the Light will always remain strong as it is since he and his kin saved both Argus and Azeroth. Eventually, the Prophet was able to reach a peaceful solution with Jaraxxus and offered him a chance of redemption. Jaraxxus accepted Velen's offer of atonement and was infused by the Light, changing his skin from red to blue as one of the Draenei. He later ventured to the Sanctum of Light where he sides with the Silver Hand.

Lord Jaraxxus abilities at a glance

These have 1.5 million HP and melee about as hard as Jaraxxus himself.

These have about 400,000 HP and low melee damage. They are stunnable.

Lord Jaraxxus is a fight with relatively simple mechanics with a moderate amount of healing required. Jaraxxus himself should be tanked in the center of the room, with ranged and healers set up in a wide circle. Spread healers evenly to avoid having large areas that are out of healing range. Fel Lightning, a chain lightning ability that increases in damage with each hop, can be very dangerous if the raid is not spread out. In order to reduce tank damage, Fel Fireball should be interrupted. Resistance Aura also helps reduce incoming damage.

Every 60 seconds, Jaraxxus alternately spawns a Nether Portal or a Fel Volcano. Nether Portals spawn a Mistress of Pain, while Volcanoes spawn 3 Felflame Infernals. Both types of adds must be tanked and nuked down by ranged as fast as possible. Melee should stay on the boss.

Jaraxxus will randomly cast Touch of Jaraxxus every (10-heroic: 10 or 15 sec, 25-heroic: 10 sec) after this buff second debuff must dispellable Curse of the Nether.

Jaraxxus will randomly cast Incinerate Flesh on one raid member. This debuff absorbs all healing on that target until a certain amount of healing has been done (10-man: 30,000; 10-heroic: 40,000; 25-man: 60,000; 25-heroic: 85,000). Healers need to react quickly: if the debuff wears off, the target blows up, causing a Burning Inferno to hit the entire raid for large amounts of damage over time.

The other debuff which Jaraxxus randomly deals to raid members is Legion Flames. This continuously spawns flames under its target for six seconds. The target should run away from other raid members (towards the room wall) while remaining in range of healers.

Lord Jaraxxus will also occasionally give himself 5 stacks (25-man: 10) of Nether Power that increases magical damage dealt by 20%, totaling 100% (25-man: 200%). Mages should Spellsteal this buff as it will increase their DPS and reduce Jaraxxus's damage. If there are too few mages to remove it efficiently, the debuff should be dispelled by priests, shamans, protection warriors and hunters (Tranquilizing Shot). In 25-man, more than 2 mages are needed: Spellsteal is very mana-intensive and triggers a global cooldown, so removing 5 stacks per mage will take a long time and nearly exhaust the mages' mana pools.

Passive healing or damage reduction should be used as much as possible to make healer's lives easier. Use healthstones, health potions, bandages, etc. to get rid of Incinerate Flesh, and don't forget Drain Life, Bloodthirst and Rune Tap.

The main difference between normal and Heroic mode is that the Nether Portals and Fel Volcanoes don't despawn. Instead, they will continue to spawn adds until the portals themselves are killed. Jaraxxus himself has a very forgiving enrage timer, but the portals are quite difficult to kill quickly enough. That means all DPS should prioritize portals and immediately switch to them when they appear. The portals will always spawn off Jaraxxus's left shoulder at 8 o'clock, about 10 yards away from him. Tanks should position the boss such that the portals will spawn approximately in the center of the room so that all DPS can quickly target them. All melee (except for Fel Fireball interrupters) should preemptively move to where the portals will spawn about 5 seconds beforehand. Once the portal is dead, melee can return to the boss.

If Jaraxxus is in the middle of casting Legion Flame or Incinerate Flesh on a raid member when it's time for a portal spawn, he may be turned at an odd angle and the portal might appear in an inconvenient spot. Everyone should be ready to dynamically adjust if this happens. Also, the timing of the Nether Power buff varies quite a bit and can cause a problem if its appearance overlaps with a portal spawn. Mages should be prepared to spellsteal the buff up until the moment a portal appears, at which time they should prioritize killing the portal.

It is particularly important to avoid having multiple Mistresses, as they have gained a nasty new ability called Mistress's Kiss. The victim of this spell takes up to 14,350 shadow damage and is interrupted for eight seconds the next time he attempts to cast any spell with a cast time. The victim should cast a spell in a school he does not plan to use, so he is locked out of that school instead of his primary school. Players can avoid taking the damage while clearing the debuff if they cancel the spellcast before it goes off. Holy paladins, whose spells with cast times are all in the Holy school, are able to avoid getting interrupted by starting a cast and interrupting it right away (Aura Mastery used on conjunction with Concentration Aura does not prevent the interrupt). If multiple Mistresses spawn from the portal, shamans should blow Heroism/Bloodlust and melee should swap targets and help burn them down.

The infernals can also cause a few problems. They are difficult for the assigned tank to pick up, and their constant movement makes focus-fire on any given one problematic. They will frequently target a random player, fly across the room to their position, and begin AOE'ing. The infernal cannot be moved once it plants itself, so nearby players have to run out of range. If the infernal targets a melee player, the tank needs to move the boss to somewhere safe. Mages should take particular care not to get separated from the boss by the infernals - they should always remain close enough to the boss to spellsteal.

The adds don't have a large number of hit points, so it is usually easy to kill them before the next portal phase, and Jaraxxus has an extremely lax enrage timer. However, it will take at least 5 or 6 portal phases to kill Jaraxxus, so the main challenge of the fight becomes burning down the portals both quickly and consistently.

Outro
Highlord Tirion Fordring yells: The loss of Wilfred Fizzlebang, while unfortunate, should be a lesson to those that dare dabble in dark magic. Alas, you are victorious and must now face the next challenge.
Garrosh Hellscream yells: Treacherous Alliance dogs! You summon a demon lord against warriors of the Horde!? Your deaths will be swift!
King Varian Wrynn yells: The Alliance doesn't need the help of a demon lord to deal with Horde filth. Come, pig!
Highlord Tirion Fordring yells: Everyone, calm down! Compose yourselves! There is no conspiracy at play here. The warlock acted on his own volition - outside of influences from the Alliance. The tournament must go on!

As with the other bosses in the instances, there are separate versions of each item for Alliance raids and for Horde raids. 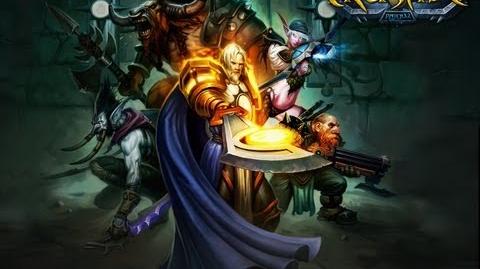 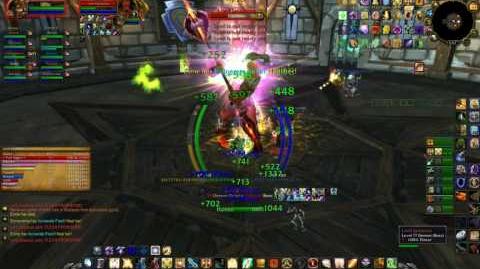 Tremor vs. Lord Jaraxxus 10-man
Add a image to this gallery 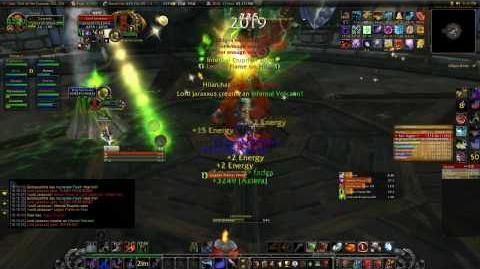 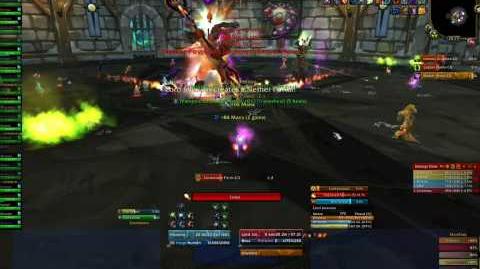 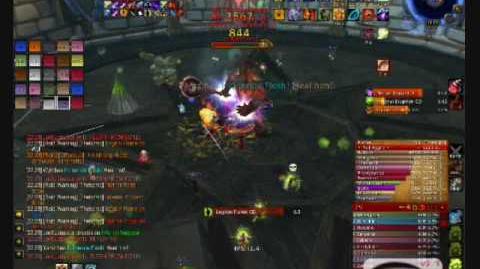 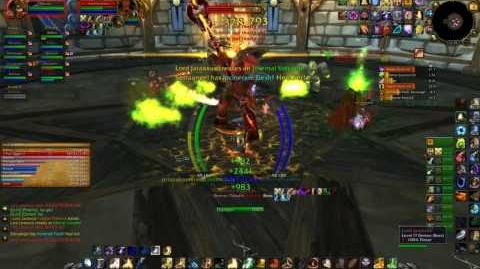 Heroic Lord Jaraxxus (10)
Add a image to this gallery 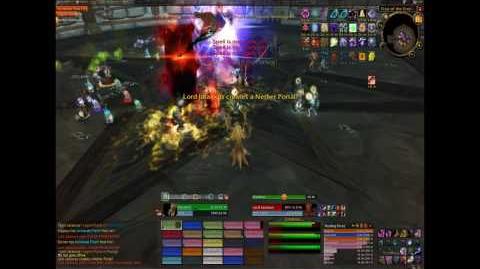 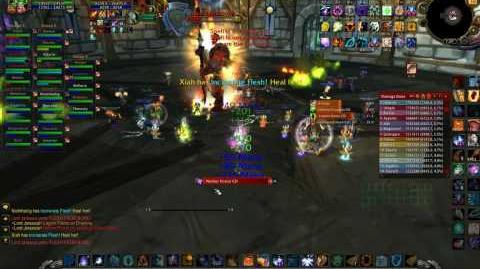 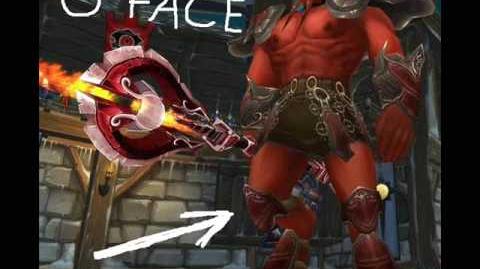 You FACE Jaraxxus - MrVoletron remix
Add a image to this gallery