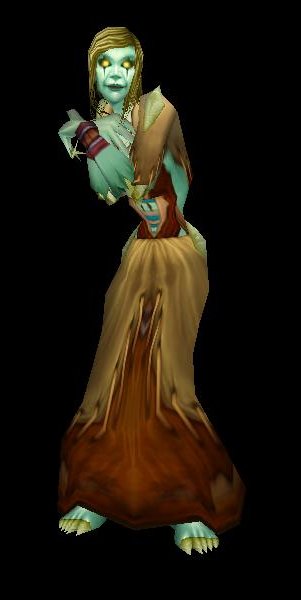 Judging from her state, Sarah must have died a violent death. Multiple stab wounds are still visible in what flesh still exists. Nothing else initially stands out as noticeable for her, other than the make-up on her eyes - Almost makes her look like a clown, always smiling... Closer examination shows that the edges of many of her bones have been sharpened to a razor edge... its obvious she does not want anyone to get to close to her...

Though seeming of her senses - Sarah is quite dangerous and could turn violent at the drop of a pin. Sometimes, she is quiet, minding her own business; then, she could burst into fits of rage and screaming...

Revenge - revenge for the death of her love... Slowly, this is growing to a hatred of all living creatures...

Passionate about the war:

Sarah is fighting her own war.

Sarah had her dream; a loving husband, Eric; a farm to tend too; happiness... Yes, it was truly "Happily Ever After..."

And then it truly all came to an end. Barely a week after getting married and moving to the farm, the farm was raided by a group of renegade Horde, three Orcs, a Troll, and a Tauren. Sarah was brutally raped and beaten while Eric was made to watch. Then, Eric was literally torn into pieces, while Sarah was left to die around his scattered remains.

Unknown to her though, Sarah had just caught the Plague days before, but just had not yet shown any of the symptoms. This actually turned into her salvation, the method to how she could now extract her revenge... After all, real love is forever.

Sarah is quite happy about the Apothecary Society's attempts to develop the New Plague. She hopes it will one day be used to eradicate all the Horde.

((many references from the movie The Crow.))

Retrieved from "https://wowwiki.fandom.com/wiki/User:Racer-krash/Sarah_Dravven?oldid=1325711"
Community content is available under CC-BY-SA unless otherwise noted.