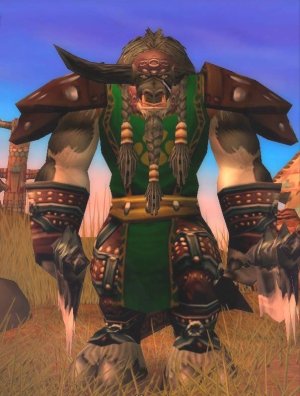 Professions: "Nothing to be proud of..." Krush HATES seeing people kill beasts, and then leaving a rotting corpse... He has learned how to skin, and how to cook what he has killed [or fished]... He also was learning about herbalism before he left, but never really spent much time studying it, so can not do much more than gather some useful "weeds" to sell later for some coin...

1) Obviously from 'mixed' parentage, as his hair is a strange mix of both black and white. Though not as much of a problem now, he was teased a lot because of his mixed splotched pattern... His mane is really mixed, so it tends to look almost grey and gives him a older appearance...

2) There is a large obvious scar across his head, and one horn that is severely disfigured, despite the attempts to trim it into something respectable...

Shy, quiet, indifferent - but looking for more [answers] The years of wandering have made him tough, but smart with survival instincts...

Krush was orphaned at a young age; not really sure how old he is, as he doesn't really remember much [or really wants to]... He was part of a tribe that still wandered and migrated. At one of their camps, his parents set their tent close to the cliff face... Supposable, the Earthmother caused a great commotion that night, and sent some of the mountain down on the camp... Huge chunks of rock fell on their tent, and instantly crushed both his parents and his sister... He was dug out of the rubble, and was somehow still alive... The elders thought it was some sign, and there was some great plan, and that is why his life was spared ?

"But the more I learn about life, I think it was just dumb luck... I did receive a good blow to my head though [, like the scar ?]."

He was raise by everyone in the tribe, and because he was "chosen", was pretty much free to do whatever he wanted... That, and his strange coloration, did mean that most of the other kids teased him most of the time... So, over time, he did less studying, and took longer and longer walks... he learned how to hunt and fish, and how to avoid the others... He heard stories of other races; Trolls, Orcs, Humans; traveling at a much younger age than when Tauren usually were allowed to leave, so he too left before his Coming of Age Ceremony to see the world...

He now mostly hunt, though he will take odd jobs here and there, and has been known to bounty hunt once in a while for coin. He don't really trust anyone, though he doesn't have any negative feelings against anyone either.

Krush later joined up with the guild, Ordo Draconis, and soon rose in their ranks. He is presently a Dracon in Ordo.

While in Ordo, he met the cow, Mooth, who he eventually made his life-mate.

On January 7th, 2008, He finally succumbed to poisons from an old bullet wound acquired during his time as an exile of the Horde, a combination of lead and mercury poisoning. His death was announced by Pand Stonebinder. He was laid to rest with his ancestors up at Red Rock in Mulgore.

Though a tiger, there is so much orange in his fur, even his stripes have a dark orange hue rather than black...

Almost looks and acts intelligent, yet you can still see the wild in his eyes... He sits by Krush's side though, usually waiting for a cue before acting...

(as told by Krush one day)

It was another one of my adventures - somehow not wanting to really get involved, but pulled in anyways... I was looking for a good place to fish, when I popped over a downed log, right between a Naga trying to finish off a Night Elf ?!?!? As with most of my wonderful timing, my jump put me right into the Naga Warrior's next swing and his trident dug deep into my back... Instinct then took over, and I swiped my axe back and hit him back in the tail... But his unintentional mark was a better blow, and I didn't have the energy to get up and pull the trident free... He though was soon back up on his tail and had a knife out to finish off me and the Elf...

Then, suddenly, a great orange flash jumped out of the jungle brush and struck the Naga... The cat's bite was true and the Naga fell almost instantly... It then flashed away almost as fast, but then came back after a minute... By then, I had regained some of my strength and had started to patch myself up, and then looked at the Night Elf. The cat just sat down and stared at us, watching the jungle every now and then... I bandaged the Elf the best I could, then moved us to what I thought was a safer place, where I was fishing earlier... Interestingly, the cat followed us, and I thought that maybe he was a friend of the Elf...

I don't speak much common [should have paid more attention in training], but I was able to get from the Night Elf that it was not her pet, and the encounter was her first meeting of our new friend too... The cat though was watching out for us, sometimes going out to hunt and bring us back small game, and just watching... I was able to slowly heal from my wounds, but the Elf was hurt too severely... I did have to admire her strength though, she too knew she was mortally hurt, but talked and chatted like two friends would in a tavern. Though I didn't understand it all, I learned she was a bounty hunter who preferred working with a sword [and 'sword' was somehow in her name, though today I can't remember it exactly]. She was hunting the Naga, as there was a large bounty on his head. She didn't know the cat, but was thankful for his help. She then told me a story about a Human Paladin named Tobias Feuer, though to this day, I have no clue why... But when she said the name the first time, the cat seemed to look up at us and purr ?

After a few days, the Elf asked to be taken to a Troll ruin that was in the area ? I carefully put her down where she asked, and in a next few minutes, watched as the rest of her precious life faded. Tobias too, stood and watched, and let out a huge roar as she passed.

And he has been following me ever since... I guess you could say, he picked me as a friend...

The most beautiful cow Krush has ever laid eyes on...

Jhullienne Treyakan and Krush Blackhorn have met on several occasions, the first being an attempted storming of the Scarlet Monestary. Since then, they have often met in the wilds or, occasionally, in a city, and spent some time together. Their most recent interaction was during the first meeting of The Conclave, when Krush endorsed Jhullienne for Premier on behalf of The Hunt. He has since been sent on a special errand for the Conclave by the Premier herself.

On a personal level, the two of them seem to have little in common, but they have a mutual respect that could lend itself to great friendship.

Retrieved from "https://wowwiki.fandom.com/wiki/User:Racer-krash/Krush_Blackhorn?oldid=1392690"
Community content is available under CC-BY-SA unless otherwise noted.