Kaname is a fun loving adventurous Tauren warrior born in Tanaris. She was born into the Ragetotem clan and from it learned the ways of the warrior and taught to live life with honor and respect. With her honorable nature she gives high respect for her heritage and the greater creatures of Azeroth, especially it’s protective Dragons. She has high regard for the Red Dragonflight and Alexstrasza for their life protecting nature. She has an undying sense of pride and high expectations for herself, which can sometimes be her own worst enemy when failure is the disappointing outcome to something she puts her heart into. She can usually be found with groups of others in a large-scale raid on some mission for the Horde, or following her own self motivations in the sands of Tanaris or Silithus looking for fulfillment.

Kaname is always looking for the big epic battles, to be a part of them, and participate in the landmark events in history. Being a part of a team and doing her part not only gives her a chance to be around others who have the same drive of conquest but also gives her a chance to try and show off her skills and show she is no weakling. Being the prideful one she is she seeks recognition for her work and talents.

Throughout her explorations and adventures across Azeroth, Kaname has found a few places where her heart tells her this is where her battle is. She has spent a great deal of effort in the sands of Silithus working, not directly for, but with the Cenarion Circle in battle against the Qiraji and the Silithid. She has a liking for the Silithid and admires their cunning combat and purpose. One of many, a swarm. Plus to her, they’re kind of cute… no idea why…

Kaname first ventured into Silithus when she was younger. She went alone because nobody would follow her, nobody she trusted her life with was ready. She was nowhere near the ability or combat skills she would need to possess in order to survive but she was determined to find a camp she heard about, Cenarion Hold. The first time she laid eyes on the Hive'Ashi’s Swarming Pillar she was overfilled with a sensation of anticipation for the battles here she would one day encounter when she was ready. The tower, to her, represented great power, and to be able to challenge that force meant a lot to her.

Kaname is a Rage Warrior, usually doing combat with two one-hand weapons. Her ideal for one-on-one combat is to overwhelm her target with as many hits as possible while charging for greater single strikes when the time is right with endless rage channeled into her hands.

Being able to carry heavy armor she usually serves as a tank within groups. Despite being a warrior, she really doesn’t like this. She would rather be more free to swing her swords around hitting as many targets as possible doing as much damage as she can then standing behind a shield focusing on protecting the others.

Although very efficient with two weapons at once, Kaname is also very skilled at using two handed weapons when the time is right. She has great two-handed sword skill but dislikes this sluggish style.

If she had a laser gun she’d go PEWPEW! 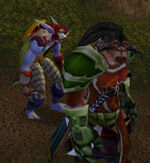 Despite being a proud honorable warrior in search of accomplishment, Kaname does have an extremely playful side. Being around her friends makes her happy. Her best friend is Majikuu, a Troll shaman, she met when she was younger. She can be pretty ‘Dingy’ as Maj calls her, especially when she’s so loopy that she doesn’t pay much attention and nearly gets herself killed and he has to run in and save her life! Majikuu does poses a strong disliking of Kaname spending her hard earned gold on new toys or clothing while she could save it for more important things. Majikuu, being a healer, works well with Kaname for she is able to protect him while he heals her, or himself, while she can dish out a great amount of pain to anybody who would threaten them. The two of them are often found together, and work closely together in Outland due to this symbiosis. Majikuu has great patience with Kaname no matter what her mood is, good or evil, even if he has to stand there shaking his head with his hand on his forehead watching her show off how high she can jump from and not die.

Another one of her friends is Tsuno, a male Tauren warrior she grew up with. He quickly became a powerful warrior and has always been an icon of what Kaname hopes to one day achieve. She looks at him with a very “… wow, he’s epic” respect. He still helps her out upon request if she is having a hard time or if she is anticipating a great battle which could require his professional assistance. Unlike Kaname, Tsuno prefers to smash things with a single larger weapon. Sometimes he dawns a crimson cape and pretends to be a Spartan warrior just to be epic.

Kaname came to Hellfire Peninsula when she was barely able to survive in the area. She spent the first few weeks in this region of Outland to hone her senses and attune herself to this strange new world. Taking part in keeping Hellfire to the Horde, she often took part in the battles around Broken Hill, The Stadium, and The Overlook. While most others around her rushed to find the best of the treasures of Outland, she took her time enjoying the place and taking a pause once in a while to enjoy every little bit of her adventure. Within Zangarmarsh Kaname helped the Cenarion Expedition a little bit, and thrashed some Naga around, but didn't stay very long as she wasn't a big fan of the surroundings. Kaname however did enjoy Terokkar Forest and once in Shattrath City she sided with the cause of the Scryers. After a few weeks of working in Nagrand she has now moved onto Blade's Edge Mountains where she currently spends most of her time. Her recent discovery of the arena system in Outland has recently motivated her to become stronger, faster, to compete and prove her abilities as a warrior!

Despite enjoying the company of her friends, Kaname spends a lot of time alone. She can often close her feelings to the whole world and walk the sands of Silithus alone not wanting to be around others. She believes that her happy hyper side is just a subconsciously created cover to protect herself from her inner darkness and anxiety of being hurt in one form or another. She has had to deal with great pains in her life, and though ready to accept anybody as her friend, she selects her closer friends whom she confides her feelings in very carefully. This same energy inside her heart is what she uses in battle to channel her rage, but attempts to use it with great focus for the max deadly efficiency.

Kaname often exhibits signs of being a sociopath, limiting her world to only herself, and trying to be alone. Part of her anxiety comes from boredom but the result of this makes it harder to have the urge to do anything about it, creating a endless downward spiral plunging her into a depression.

At times her feelings are so dark that it can overtake her and affect her judgment, causing damage to her friendships, her decisions, and her life. She will no longer care about the goals she has set, and her sense of honor is often replaced with selfishness and cruelty. At one time she dawned a darker armor and hid her face for a great length of time as she no longer wanted her image to be ruined by the things she might do and later regret. Her nickname, Redken, was adapted to serve as her real name so history wouldn’t recognize the cruel things she could do as the works of Kaname, but maybe someone else.

Kaname sometimes dresses up as a Tauren Rogue and runs around shouting, "Tauren Rogue... UNSEEN!" and hiding behind small objects like trees or stones trying to be hidden. She isn't very good at it.

Kaname's father is named Skycow, a tauren with a lust for the Blood Elves and a drinking problem!

Kaname's favorite armor set is the Brutish armor set, replacing the headpiece with Embrace of the Lycan. One of the Thottbot screens is Kaname!

Kaname's Black War Raptor's is not named yet :(

Retrieved from "https://wowwiki.fandom.com/wiki/User:RaCailum/Kaname?oldid=2104578"
Community content is available under CC-BY-SA unless otherwise noted.