Knights of the Ebon Blade, formerly The Scourge

Tadkins is a former gnomish mage and citizen of Dalaran. She is the daughter of Ellys and Malkin Naletop, renowned mages and demon slayers. Those who knew her in life would describe her as driven and extremely inquisitive. The stories bestowed upon Tadkins as a child of the Burning Legion and other threats battled by the Kirin Tor and Council of Tirisfal instilled a certain fear into the young gnome; a fear that when the time came where her life was threatened, she would be utterly helpless against it.

Her endless curiousity and hunger for knowledge led her to commit strange, sometimes criminal acts to sate her mind and quest for power. Tadkins was especially fond of inscription and studying Azerothian lore and war history, much of which she incorporated into the fighting technique taught to her by her parents. She was trained to keep an open mind about all things, that discounting a potential resource or source of strength is needlessly limiting yourself.

Throughout the course of her life, the restraints and limitations of the ruling council of magi left Tadkins feeling suffocated. Taking the lessons of her parents into practice, she eventually became a member of an underground organization called "Viper", which made it's home in the shadowy recesses underneath Dalaran. As a secretive group that defied the laws and restrictions imposed by the Kirin Tor, Tadkins truly felt at home with them. She had made many friends amongst her fellow mavericks, and immersed herself in the near-endless supply of forbidden knowledge and forgotten lore.

During the turmoil brought about by the Third War, Tadkins found her parents murdered. Seeking justice and to uncover the truth behind the killing, she unwittingly made a pact with the renegade mage and aspiring necromancer Kel'Thuzad, and revealed many important secrets and useful information to the Cult of the Damned. Eventually, she realized the error of her decisions, but it was too late.

While attempting to undo the damage she had done, the champion of the Lich King, Arthas Menethil, laid siege to Dalaran to claim the Book of Medivh. Shortly after that, the demonlord Archimonde obliterated her city. Thousands of citizens were killed, and the organization Viper was crushed. Tadkins barely survived the destruction bought about by the massive eredar, and she sought out to right the wrongs she had committed.

She was killed shortly after, alone in the wilds, battling the Scourge. The corpse of the fallen gnome was delivered to Acherus, the Ebon Hold, alongside the bodies of many other brave heroes who fell in the war.

Tadkins stands at around an average gnomish height of three feet tall. Ragged and pale white hair flows from her head and onto her shoulders, stiff from the constant sweat of battle. She is often seen garbed from head to toe in simple, dark-colored traveling clothes, with the purpose of hiding the armor underneath. She stares at you with large, bright, inquisitive eyes brimming with an unnatural blue light. Her dirt-colored and deathly complexion does little at hiding her current state of existence.

While the handle of a wicked axe can be seen poking out from underneath her concealing cloak, the most prominent object on her person is a leather-bound tome chained at her side, pulsing with power. Three glowing symbols are displayed on it's cover in a triangle formation.

Tadkins walks around with a cautious stride, her eyes narrowed in grim determination. The glassy orbs that make up her eyes constantly shift from side to side as she takes notice of her surroundings and the people within.

Unlike most of her fellow Knights of the Ebon Blade, Tadkins can be found mounted atop an undead ram as opposed to the Deathchargers her comrades prefer. The ram itself is cursed into undeath as she is; it's eyes glowing the same blue as it's rider. It's cold, stiff fur nearly matches the coloring of it's gnomish master as well.

The white-haired gnome, clad in dark, fur-lined armor, peers at you curiously through wide, shining glass-like eyes. A wicked blade that spans the length of her entire frame hangs casually sheathed across her back. It's clear that she is learned in the ways of combat, but Tadkins merely continues to study you atop her undead ram, as if waiting for your reaction...

If there is one word that can be used to describe Tadkins, it is this; defiant. She tends to scoff at any form of law and order that is not her own. She rejects any form of authority or domination thrust upon her, sometimes violently. Tadkins will occasionally accept guidance and council from those who have proven worthy in her eyes, though this list of people is extremely short. Those who know her chalk up Tadkins' behavior as a result of the shame she carries from her past actions.

Even so, Tadkins can still be described as a patient, open-minded, and focused gnome. A mage in life, she never forgot what it meant to be one. Through her life spent as a citizen of Dalaran, she discovered that even in tortured undeath, expanding one's mind brings peace, understanding, and a calm that shines through terrible suffering. After all, if "knowledge is power", then someone who walks forever as one of the undead has the potential to become remarkable indeed. Yet even so, whenever the situation warrants it, the hunger for battle etched in her very being manifests itself through her frightening skill with dark magic and weaponry.

She once maintained strong ties to the Alliance, sharing similar ideals with it's monarch. However, the gross incompetence of the Stormwind guard and government disgusted Tadkins, forcing her stunning betrayal in the end. She still despises the Horde for their most recent cowardly, underhanded actions in Northrend.

The details of Tadkins' farewell to the Alliance can be found here. 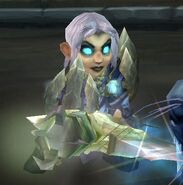 Tadkins doing something other than fighting for a change.
Add a image to this gallery
Retrieved from "https://wowwiki.fandom.com/wiki/User:Nebesk/Tadkins?oldid=2853179"
Community content is available under CC-BY-SA unless otherwise noted.