I have been playing wow on my own account since a month after the game was released. After realizing very quickly that sharing an account wasn't going to work. For most of my wow life i have been in a raiding guild. Final_Equilibrium(Aggramar EU) was in nax pre tbc but disbanded soon after tbc was released. I bounced around to a few other guilds in the end joined Chaotic_Illusion(Aggramar EU) where i stayed for 6+ months until i rejoined Final_Equilibrium(Aggramar EU) in OCT 07. My main char is a shadow priest but i also have a lvl 70 warlock, and a warrior who will make 70 someday soon.

I have worked as a computer programmer for 14+ years so when i started spending more time on wowwiki creating my own bot was just second nature. User:Laurlybot is coded in PHP old version was visual basic. Due to this bot i have apperntly been voted crazy WoWWiki:Crazy_people/Laurly

I can be found on #wowwiki most days and nights. 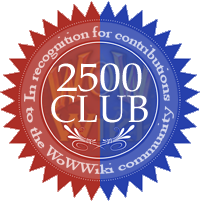 This user is a venerable member of
the 2500 club!
Retrieved from "https://wowwiki.fandom.com/wiki/User:Laurly?oldid=1808219"
Community content is available under CC-BY-SA unless otherwise noted.