Gorund is the name of my main character and of all my accounts created on internet after i began playing World of Warcraft.

Sorry if i can't speak english very well but i am Italian^^. 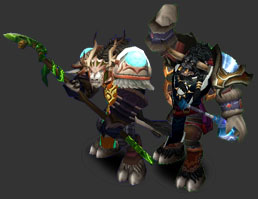 These are my 2 level 70 Characters. I created them about simultaneously, and leveled up to 60 about simultaneously too:P When the expansion came out, I stopped using Erodash and focussed on the druid until June 2007, when i raised up to 70 the Shaman too.

My alts are for having fun. I do not plan to level any of them constantly, as I log in them when I am bored of playing the mains.

I found a friend to RolePlay with, and created two characters to level up, according to my fanfic.

Here are characters I plan to do in future

Since i began playing in December 2005, i have been able to visit both pre-tbc and tbc raids and dungeons.

With both my main characters, i finished Zul'Gurub, Ruins of Ahn'Qiraj(I was even present in my guild's first Ossirian kill), Molten Core and Blackwing Lair. Only Erodash killed Onyxia because after I attuned him I was bored of the quest chain and never attuned the other character(Although I am doing that now to kill Ony with two friends and get a lot of money:P).

When the Expansion came, i was in the first 30 players to hit 70 in my guild, so I early joined one of the Karazhan raids. When the guild was ready, we raided Gruul and with Gorund i was present at the first King and Gruul kills. Then I stopped playing for summer(it was May when we killed them the first time) and rejoined on October, When we dropped down Hydross(after Lurker and some other bosses). After that I was not present to other first kills, but i visited SSC, TK entirely. Now I'm not playing WoW.

I really love Lore, it's since december 2006 that i live on wowwiki to know the more i can about Azeroth's story and characters. I'd really like to play on a Roleplaying server, but none of my friends did and so i did not too=(. The major think I love of the lore are the Dragonflights and their story:P

Well I think they're enough:P

Retrieved from "https://wowwiki.fandom.com/wiki/User:Gorund?oldid=1530620"
Community content is available under CC-BY-SA unless otherwise noted.