The Slayer, Of Stormwind, Of Darnassus, The Argent Champion 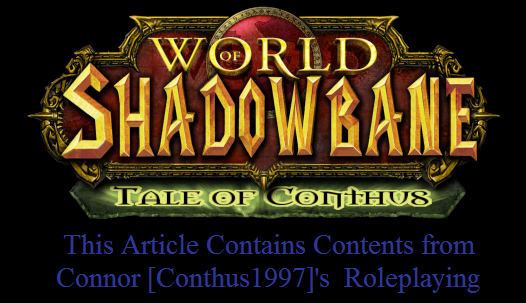 Marconiss Shadowbane (or Marcco [Nickname], Razielos [Alliance], "Its Personal" [Horde]) is the Second Generation born of The Shadowbane Family, Is the Son of Rosali Shadowbane, & the Father of Conthus Shadowbane.

Awakening of the Lich King, Murder of Conthus Shadowbane

Attack on the Lich King

According to Connor he says that during several episodes in a machinima series he did relevent to Tale of Conthus he needed Marconiss to talk. And due to small situation, Mark pry wouldn't talk. So Naturally Connor decided to just give everyone in the Family a relevent voice so people could just Imagine after reading the Text. Connor said that Marcco's voice would sound to that of the same voice actor of Alexandros Mograine

Retrieved from "https://wowwiki.fandom.com/wiki/User:Conthus1997/Marconiss_Shadowbane?oldid=2459871"
Community content is available under CC-BY-SA unless otherwise noted.