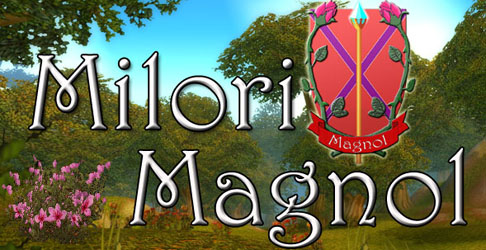 While a skilled alchemist and priestess adept in the Holy ways, Milori comes off as kind of a flirt. Although married, being provocative and suggestive to get her way is not at all beneath her. The robes she chooses to wear are often a reflection of this.

She's very polite, and always helps those in need, but there are times where she can be, for lack of a better word, a total bitch. She may be trying to change things, but the Magnol blood line runs strong.

Milori acts rather childish at times, especially in the company of friends or allies or under the influence of alcohol. She also comes of as a bit ignorant when matters of her own family are involved. In most cases she's very proper and formal when speaking to strangers, although she abhors formal titles like "Lady" and "Grand Priestess", and insists that after the proper introductions are out of the way, that she's merely referred to as "Milori".

She wears a brooch of the Magnol family crest pinned to her robe.

Years ago, Milori shook the foundation of the Magnol family when she had decided to wed a member of a rival clan, the Cilnos. Milori and her husband were able to overcome the termoil to live happily together and have two children, Xanthier and Liatania. Both Milori and her husband felt that Xanthier would amount to greatness in the arcane arts, and pressured him constantly to do his best. Unfortunately it pushed him over the brink, and Xanthier ran away from Magnol academy on his 17th birthday. Milori had not seen him since, and only received an occasional letter from him.

Ten years later, (present day) Milori had recieved a clue to the whereabouts of her son, when she had met with a Night Elf hunter named Tyuleios Wildpetal. She heard him refer to his Nightsaber pet as "Xanthier".

When Milori inquired further into this, she found out that Tyuleios was saved by a red-haired rogue in Teldrassil. All he was able to get from him was his name as he ran back into the shadows. As a token of gratitude, Tyuleios named his nightsaber pet after Xanthier as a reminder of his savior.

Acting off the only clue she's ever recieved, Milori headed to Teldrassil to search for her son. Once she arrived, Milori realized that there were far greater problems in the world than her own. Her son was alive, and she knew this... but if things kept going the way the were going, they might never meet again. She pledges to assist the Kaldorei and uses the collective power and assistance of the Magnol family to help her accomplish this goal.

((Work in progress. Check back later for additional information))

Retrieved from "https://wowwiki.fandom.com/wiki/User:Ciann/Milori?oldid=2210668"
Community content is available under CC-BY-SA unless otherwise noted.