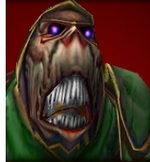 As a wiki editor

Ionza was born in Auberdine,Kalimdor a few thousand years ago. She is one of two daughters of Cîrîdan a local shipwright of Auberdine, while the other daughter, is her sister Celestie. Her mother was a senior Sentinel commander, who was killed in the battle of Mount Hyjal during the Third War. After the devestating effects of the cataclysm on her home town which killed her father, she fleed Auberdine and embarked on an epic adventure, which brought her all around the world, while Celestie choice to seek refugee in Ashenvale and help the night elves there, defending the NE territory there and killing horde invaders.

Ionza have recently settled down in the gloomy and "cosy" town of Darkshire in Duskwood, were she is often found running erands and often stopping by to fill up her food supplies for a raid into Swamp of Sorrows and Raven Hill Cementry or an expeditionary treks to record strange new creatures around the world.

Retrieved from "https://wowwiki.fandom.com/wiki/User:ByzantiosAE?oldid=2583330"
Community content is available under CC-BY-SA unless otherwise noted.