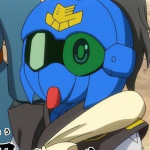 This user is a notable member of
the 500 club!

Hi! I've been playing warcraft ever since Warcraft II came out for the PC. I'm relatively new to World of Warcraft; but I've been studying lore for over a year, and my brother has been an active player since 2004. (He is the guild master of the Unseen Order and has Five level 70's) WoWWiki has become one of my favorite sites and I'm gonna try to help out in any way I can.

I'm currently enrolled in college, and enjoy games, drawing and writing stories. I enjoy certain anime and movies, and surfing the web on my Wii. I have a younger brother, (who has two 70's and was recently made a guild leader), and two sisters, the older is a "light" Warcraft player, and the other is a "Tickle-me-Emo" and is in the throes of teenagerdom. Besides warcraft I like Zelda, Final Fantasy, Megaman, Gundam, Starfox, Doctor Who, Naruto, Mario Bros, (Nintendo in general), Freakazoid, Animaniacs, FLCL, and lots of other stuff!

I'm pretty active in the evenings on Blayaden, my prot/fury warrior, and Duskwatcher, my hunter on the Earthen Ring US server. If you see me, give me a holler! :D

And I also enjoy Roleplaying, and writing stories with a character I made before World of Warcraft...

As you can plainly see I'm kinda parital to the elven races... but I liked them BEFORE Orlando Bloom XD. Alleria Windrunner is my favorite person the Warcraft Universe. The Elven Ranger was my favorite unit, and the basis of my RP character.

I'm currently in the process of re-writing these articles so these will get major changes... Eventually. -_-;

Here is some images I made using WOW Model Viewer, and a few drawings!

In general I don't hate any races or classes, I just like some people and classes more than others. I prefer the Alliance over the Horde, but that doesn't mean I hate them. I kinda have a love/hate relationship with the blood elves, however.

Most of the pictures I've posted were taken by either my brother(who is a true WOW addict) or me. He takes pictures and sends them to me (as well as sending notes about particular npc's etc...) I did the sketches though. If I don't have an image off hand I usually resort to using images from Wowhead, but I try to replace them with pictures I(or my brother) have taken.

Retrieved from "https://wowwiki.fandom.com/wiki/User:Blayaden?oldid=2413800"
Community content is available under CC-BY-SA unless otherwise noted.