The unicorn is a species of horse-like creature living on Azeroth, but, unlike horses, they have a horn growing out of their head. The horns and their bright white color comes from alteration from the Well of Eternity, when a herd of horses was grazing near it before the Sundering.

Zhevras are found throughout the Barrens, as they have a horn in their head, they may be a subspecies of unicorn.

The basic unicorn subspecies, usually depicted as white. They can be summoned by druids and elven rangers using a spell, Summon Nature's Ally IV.[3]

Celestial charger unicorns are a more powerful subspecies of unicorn. They can be summoned by druids using a spell, Summon Nature's Ally IX.[3]

Note: They are said to be stronger as they are summoned with a higher Summon Nature's Ally level than the normal unicorn.

Manual of Monsters Appendix Three describes another subspecies of unicorn, the hornsaw unicorn, however, the validity of the source is disputed. 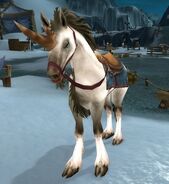 Stabled Quel'dorei Steed.
Add a image to this gallery

The Unicorn is possibly one of the oldest and most recognized mythical creatures in the world. The traditional European Unicorn looks similar to a horse, save for cloven hooves, a goat beard, and a lion-like tail. Unicorns are known for their healing powers and their solitary nature.

Retrieved from "https://wowwiki.fandom.com/wiki/Unicorn?oldid=2751412"
Community content is available under CC-BY-SA unless otherwise noted.