As with Uldaman and Ulduar, Uldum houses one of only a few of the known titan constructions, the existence of which predates that of mortal life on Azeroth. For years historians have explored southern Kalimdor for a means of entry into this ancient titan land, searching for more evidence of Azeroth's origins. But the Cataclysm will change everything, for the façade behind which Uldum has been tucked for millennia will be ruptured, leaving powerful mysteries vulnerable to discovery by the bravest, smartest, or perhaps even most brutal explorers.

Uldum (pronounced: /uːl'duːm/), also known as the Land of the Titans" is an ancient desert located on the southern coast of Kalimdor, surrounded by the Un'Goro Crater in the north, Tanaris Desert in the east and Silithus in the northwest. It is the homeland of stone-cat people known as Tol'vir and is rich with Titan lore. Somewhere in Uldum is a pyramid known as Maker's Terrace. Deathwing's minions are looking for it, trying to use it as a weapon of mass destruction.

Fragments of notes unearthed from Bael Modan suggest that a great titan city lies deep within the rocky expanse of the southern desert. So far, dwarven expeditions have yet to track down the location of Uldum, but they are confident that it’s only a matter of time.[1] Uldum is a research facility for the titans in their continuing efforts to enhance the biosphere of Azeroth. Specific information regarding their work as it relates to Uldum is unknown and can only be accessed with the Plates of Uldum.[2]

Uldum was mentioned in the legends of Azeroth, but its location long remained a mystery. Brann Bronzebeard mentioned in his travelogue, Lands of Mystery, that he searched for it all over Tanaris, but could never find it. He wondered if it could just be another name for the Caverns of Time, but he didn't know for sure.[3] However, his assumption proved to be false, as Uldum is actually located on the southern edge of the continent, and it was hidden by some sort of Titan cloaking device. The Cataclysm damaged the device, and unveiled the long forgotten, mysterious land.

It is notable however that the dungeon release order in World of Warcraft somehow mirrors Brann's journey to some degree, in that Brann has visited Ulduar after Uldaman, but has not yet reached Uldum.

Prospector Gunstan maintains a lonely vigil nearby on behalf of the Explorers' League.

The landscape of Uldum is predominately desert, with a large river surrounded by an oasis flowing through the center of the region, mostly populated by the Tol'vir, with the largest settlement - the Lost City located on the river delta. The western part of Uldum consists of a large expanse of the wind-swept dunes with half-buried Tol'vir settlements and pyramids, caused by the recent transgressions of Al'Akir's air elemental minions. In the east lies a massive pyramid that houses the Titan complex known as the Halls of Origination. The northwestern part is the location of the Obelisk of the Stars and The Gate of Unending Cycles connecting the region with Tanaris desert. The southern part of the region besides the river delta is mostly cliffs, with settlements held by the Neferset. The southwestern part is being held by an expedition led by Commander Schnottz. The Cataclysm also brought the Skywall towers into Uldum that serve as an entrance to the Al'Akir's domain - the elemental plane of air. Al'Akir sends his elemental minions to convince the Tol'vir to join his new liege Deathwing, even rewarding them with removal of the Curse of Flesh. Those who dared to oppose suffered dire consequences as exampled in the Orsis settlement. 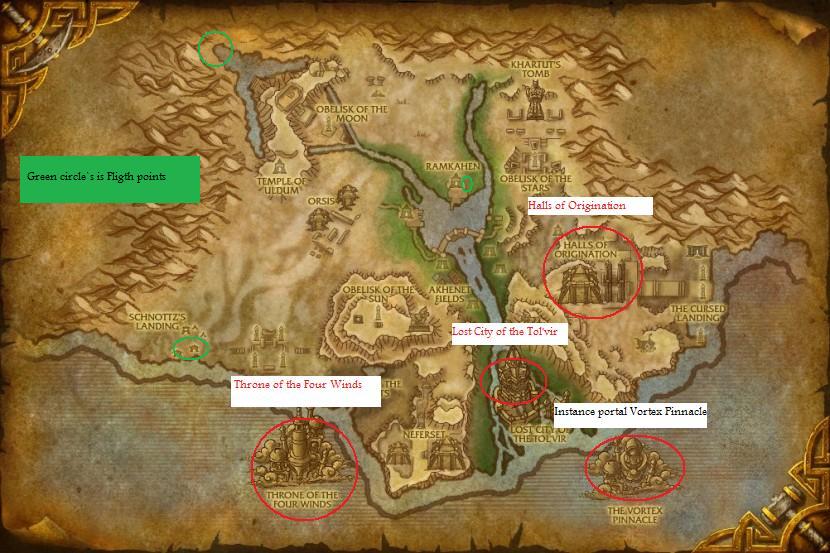 The fauna of Uldum is not widely known to the outsiders because of the long-timed isolation of the region from the outside world.

It is said that Uldum was one of the three ancient halls in which the earthen (the ancestors of the dwarves) were left to sleep by their titan creators.[4] Similar locations exist at Uldaman and Ulduar; additionally, a fourth location, Maraudon, is the location of Terramok, an ancient titan vault. 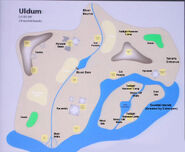 Concept map of Uldum from Blizzcon

Uldum zone entrance
Add a image to this gallery

Retrieved from "https://wowwiki.fandom.com/wiki/Uldum?oldid=2470551"
Community content is available under CC-BY-SA unless otherwise noted.