The Twilight Shore[78.1, 65.6] (also known by its plural, the Twilight Shores) is a stretch of beach in the Twilight Highlands, northwest of Highbank and south of Dragonmaw Port. The Alliance and Horde struggle for control of the beachhead, continuous fire riddling the shore. Alliance quests are given on the shore across from Highbank, while the Horde quests are given from the boat[78.4, 62.3] close to Dragonmaw Port. Midway down the beach is a PvP point[77.5, 65.3] that can be captured, rewarding the players of whichever faction has control with the Beach Head Control buff, which increases both attack and spell power.

The Twilight Shore also includes the deforested area leading up to the Obsidian Forest where shredders can be found roaming and a lost Wildhammer dwarf is in need of rescue.

Be wary of the hovering red marks scattered throughout the shore (see media below). These mark where explosives are about to land, and will deal moderate damage to players standing in the area, as well as knocking them back a few yards.

The Twilight Shore in the Twilight Highlands. A 2vs1 skirmish can be seen in the foreground. 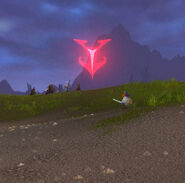 The bobbing marks along the shore. Stay clear!
Add a image to this gallery

Retrieved from "https://wowwiki.fandom.com/wiki/Twilight_Shore_(Twilight_Highlands)?oldid=2528058"
Community content is available under CC-BY-SA unless otherwise noted.